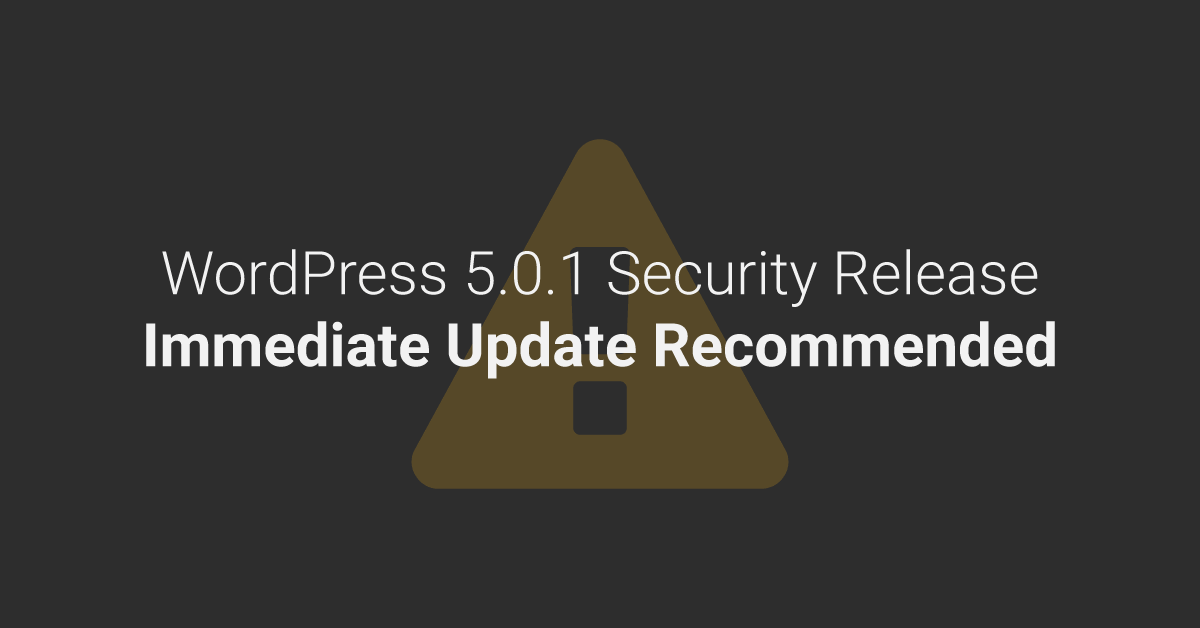 WordPress 5.0.1 was released Wednesday night, less than a week after the much anticipated release of WordPress 5.0. This security release fixes seven security vulnerabilities, a few of which are quite serious.

Sites running versions in the 4.x branch of WordPress core are also impacted by some of the issues. WordPress 4.9.9 was released along with 5.0.1 to address the issues for those users.

We have not seen attempts to exploit these vulnerabilities in the wild yet, but given the number of sites impacted we expect that to change.

The speed at which these security issues were discovered, reported and fixed is a testament to the strength of the WordPress community working together.

Team Yoast discovered that the user activation screen could be indexed by search engines in some uncommon configurations, leading to exposure of email addresses, and in some rare cases, default generated passwords. WordPress has addressed this by stripping the activation key used in the URL, and storing the value in a cookie instead.

Sam Thomas discovered that contributors could craft meta data in a way that resulted in PHP object injection. This looks to be similar to the 2 arbitrary file delete vulnerabilities fixed in WordPress 4.9.6. This vulnerability allows an author to assign an arbitrary file path to an attachment. The file path supplied by the author uses the phar:// stream wrapper on a previously uploaded attachment which leads to object injection utilizing a “feature” of the PHAR file type which stores serialized objects in the metadata of the PHAR file. Sam Thomas presented this technique at BlackHat earlier this year.

Simon Scannell of RIPS Technologies discovered that authors could create posts of unauthorized post types with specially crafted input. The requirement that an attacker would need at least ‘author’ level privileges makes the likelihood of this being exploited on a widespread basis very low.

Tim Coen discovered that contributors could edit new comments from higher-privileged users, potentially leading to a cross-site scripting vulnerability. This is another vulnerability that requires a higher-level user role, making the likelihood of widespread exploitation quite low. WordPress addressed this issue by removing the <form> tag from their HTML whitelist.

XSS That Could Impact Some Plugins

Tim Coen also discovered that specially crafted URL inputs could lead to a cross-site scripting vulnerability in some circumstances. The code change in WordPress core affects the wpmu_admin_do_redirect function which is not used in WordPress, but a plugin may call this function somewhere.

Karim El Oeurghemmi discovered that author-level users could alter metadata to delete files that they weren’t authorized to. This issue stems from the 2 arbitrary file delete vulnerabilities fixed in WordPress 4.9.6. The fix in WordPress addressed how attachment files are deleted, by restricting the file paths to the uploads directory, but did not address the issue of authors having the ability to change the attachment paths to arbitrary files. An author can use this to delete other users’ attachments.

We have released firewall rules to protect our Premium customers against the vulnerabilities most likely to be exploited. Sites running the free version of Wordfence will receive them in 30 days.

Sites on WordPress 5.0 should update to version 5.0.1 as soon as possible. Those with automatic updates enabled for WordPress core should have already been updated, but given the nature of the vulnerabilities we recommend you check your sites manually just in case.

Sites running WordPress 4.x versions should update to version 4.9.9 as soon as possible. We’ve heard conflicting reports about automatic updates working for this upgrade. If you need to manually upgrade, the 4.9.9 update can be downloaded here.

You can find the official release announcement from the WordPress team here.