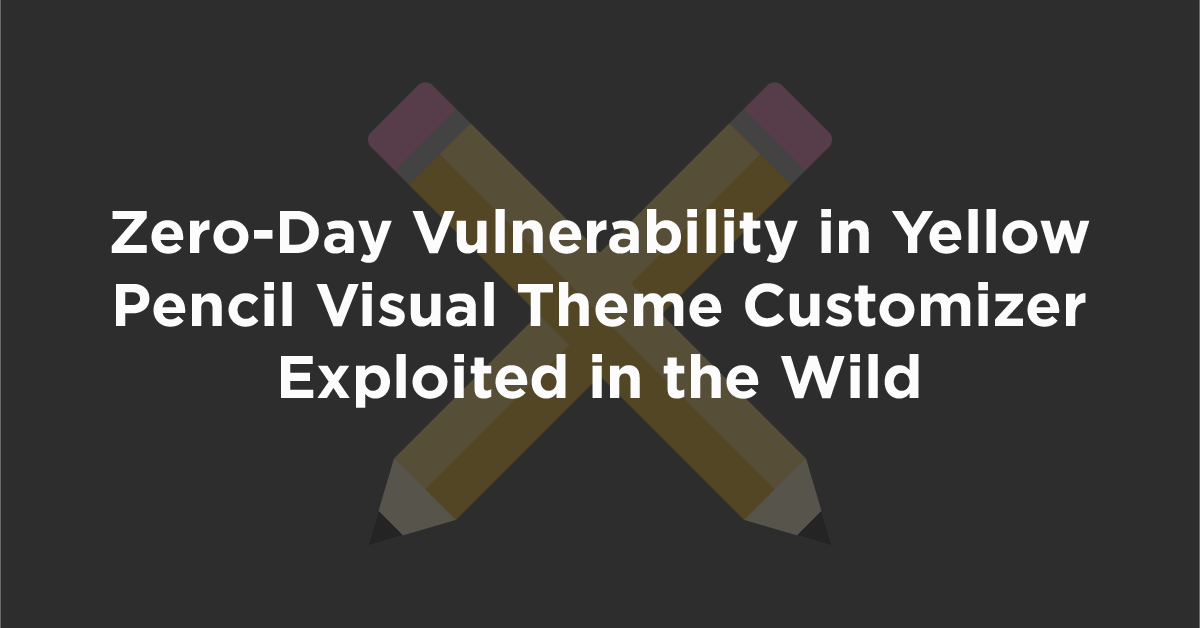 On Monday the WordPress plugin Yellow Pencil Visual Theme Customizer was closed in the WordPress.org plugin repository. The plugin is quite popular, with an active install base of over 30,000 websites. On Tuesday a security researcher made the irresponsible and dangerous decision to publish a blog post including a proof of concept (POC) detailing how to exploit a set of two software vulnerabilities present in the plugin.

We are seeing a high volume of attempts to exploit this vulnerability. The exploits very closely resemble the POC posted by the irresponsible researcher.

We deployed a firewall rule to protect against these attacks yesterday, which our Premium customers have now received. All site owners are urged to remove the plugin from their sites immediately.

The first flaw that enables this attack is present in the yellow-pencil.php file within the plugin. The yp_remote_get_first() function is called on every page load and checks if a specific request parameter (yp_remote_get) has been set. If it has, the plugin escalates privileges to that of an administrator for the remainder of the request.

This privilege escalation makes any user capabilities checks later in the plugin moot. As a result, unauthenticated users can perform actions, such as change arbitrary options, that were only meant for site administrators. A cross-site request forgery (CSRF) check is missing in the function below that would have made it much more difficult to exploit.

We’re again seeing commonalities between these exploit attempts and attacks on recently discovered vulnerabilities in the Social Warfare, Easy WP SMTP and Yuzo Related Posts plugins. Exploits so far are using a malicious script hosted on a domain, hellofromhony[.]com , which resolves to 176.123.9[.]53. That IP address was used in the other attacks mentioned. We are confident that all four attack campaigns are the work of the same threat actor.

As continues to be the case, a disgruntled security researcher continues to put the WordPress community at risk by publicly disclosing POCs for zero-day vulnerabilities. In this environment we strongly recommend staying on top of WordPress security news and considering an upgrade to Wordfence Premium.

Site owners running the Yellow Pencil Visual Theme Customizer plugin are urged to remove it from their sites immediately. Wordfence Premium customers received an updated firewall rule to protect against this vulnerability yesterday. Free users will receive it 30 days later.