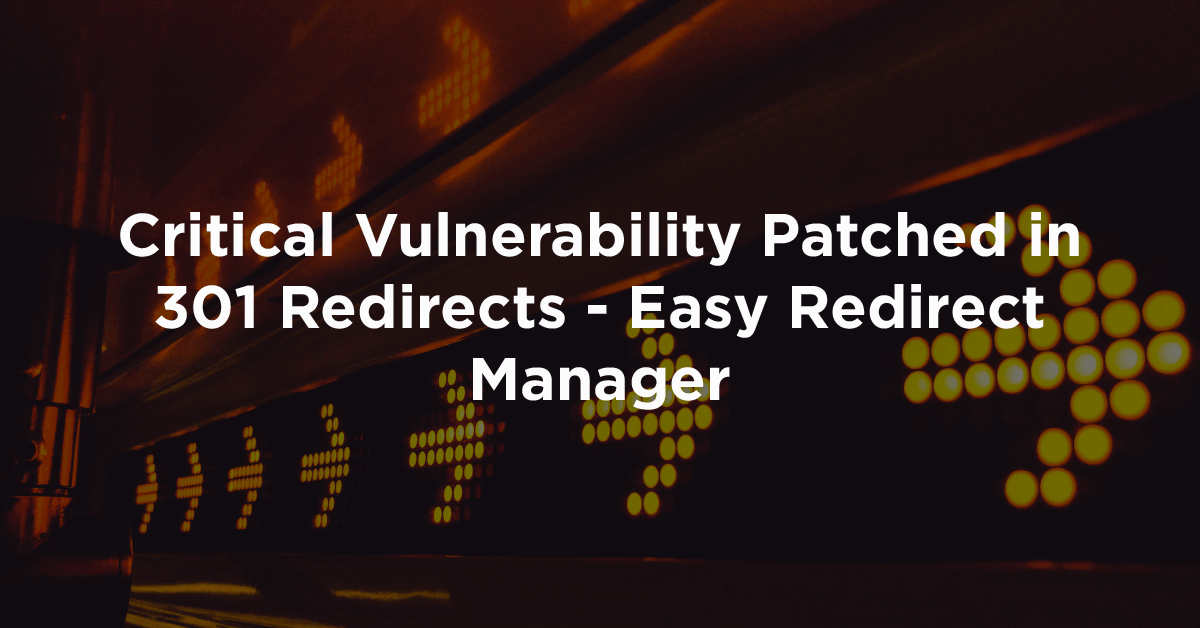 On Friday December 13th, our Threat Intelligence team discovered vulnerabilities present in 301 Redirects – Easy Redirect Manager, a WordPress plugin installed on over 70,000 websites. These weaknesses allowed any authenticated user, even subscribers, to modify, delete, and inject redirect rules that could potentially result in a loss of site availability. We privately disclosed the issue to the plugin’s developer, who was incredibly quick to respond and release a patch.

This is considered a critical security issue, and websites running 301 Redirects – Easy Redirect Manager 2.40 or below should be updated to version 2.45 immediately. On the same day we discovered the vulnerability, Wordfence Premium customers received a new firewall rule to protect against exploits; free users will receive the rule after thirty days, on January 12, 2020.

Therefore, due to the lack of capability checks on the AJAX actions, any user authenticated as a subscriber or above can use these AJAX actions to delete redirect entries, create new redirects, and view the form to add or edit inline entries. Because many attackers compromise sites with the hopes of redirecting traffic to spammy or malware-infested sites, this is an attractive and easy method of exploiting a vulnerable site.

The unprotected AJAX actions are where the vulnerabilities begin; a deeper look found more problems.

Investigating further, we found that the ID parameter, which is used to create an ID for new rules and identify existing rules, lacked any input validation or sanitization and was later reflected on the page. This led to a reflected XSS vulnerability that could not only be exploited on its own, but also in conjunction with a new redirect injection. Fortunately, the Wordfence firewall’s built-in XSS protection blocks this vulnerability for both our free and premium users.

The vulnerable version of the plugin also failed to use a nonce for any of the AJAX actions that were used to modify and create new rules. This created a CSRF weakness that could be exploited if an attacker could not gain subscriber level privileges. In addition, the attack surface for CSRF to be exploited was much larger due to the lack of permissions checks on the AJAX actions. As such, any user with subscriber or above permissions could be targeted to exploit this vulnerability, creating a more worrisome issue.

Each independent vulnerability was significant. As a group, the vulnerabilities in the 301 Redirects plugin created a significant risk to the WordPress site owner with a vulnerable version installed. An attacker exploiting these weaknesses could create havoc for site visitors who could have been redirected to malicious sites. These sites could have collected credentials via phishing pages or infected vulnerable computers with malware, amongst other things.

Even if a site did not have subscriber registration open, the CSRF vulnerability might allow a social engineering attack to succeed in injecting new redirects or deleting old ones.

If one exploit attempt failed, there was another exploit that could possibly succeed.

In today’s post, we detailed several vulnerabilities present in the 301 Redirects – Easy Redirect Manager plugin, that led to one very severe issue. Fortunately, the plugin developer was incredibly quick to respond and release a patch for the vulnerable endpoints. These flaws have been patched in version 2.45 and we urge users update to the latest version available as soon as possible.

Sites running Wordfence Premium have been protected from attacks against this vulnerability since December 13th, 2019. Sites running the free version of Wordfence will receive the firewall rule update on January 12th, 2020 and should update the 301 Redirects plugin immediately.