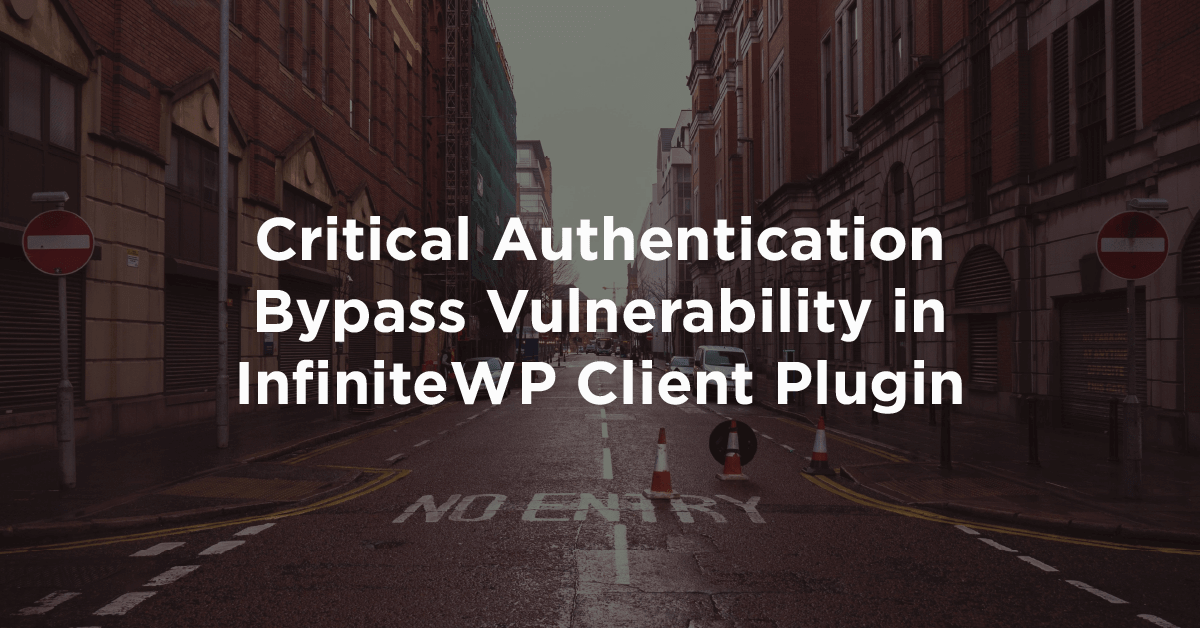 This is a critical authentication bypass vulnerability. A proof of concept was published this morning, January 14, 2020. If you are using InfiniteWP client version 1.9.4.4 or earlier we recommend immediately updating your installation to protect your site.

How the InfiniteWP Client Works

The InfiniteWP Client plugin works by allowing a central management server to authenticate to the WordPress installation so that site owners can manage the site. From a central location, site owners can perform maintenance such as one-click updates for core, plugins, and themes across all sites, backup and site restores, and activating/deactivating plugins and themes on multiple sites simultaneously. The InfiniteWP Client plugin authenticates the central management server to each WordPress installation.

Here’s a basic proof of concept request which exploits the vulnerability.

The body of the request decodes to {"iwp_action":"add_site","params":{"username":"admin"}} which instructs the InfiniteWP client to run the add_site action, and also to login as the admin user. It requires no authentication and is relatively easy to exploit.

We opted to integrate protection for this vulnerability into Wordfence. From within Wordfence, we can determine if the site is already connected to an InfiniteWP server, and prevent the vulnerable code from running if either the add_site or readd_site actions are passed to InfiniteWP client.

So far, we have not seen evidence of this vulnerability being exploited in the wild, but we expect to see attempts in the near future.

As an additional note, the fix we have implemented for this vulnerability required tight integration with WordPress. Wordfence runs as a WordPress plugin and is therefore able to implement this kind of fix.

We are bringing this to your attention because if you are using a cloud based WAF that does not tightly integrate with WordPress, you may not be protected against this vulnerability. Your cloud WAF does not have access to the WordPress API to implement this kind of fix.

Protection for All Users

Normally, we would release a firewall rule to as a part of our Threat Defense Feed which is deployed in real-time to our Wordfence Premium customers, and to the free community version of Wordfence within 30 days. Because protection for this vulnerability required code changes within Wordfence, we’ve opted to make it available to all users immediately.

Thank you to Matt Rusnak and Ramuel Gall for contributing to this update.