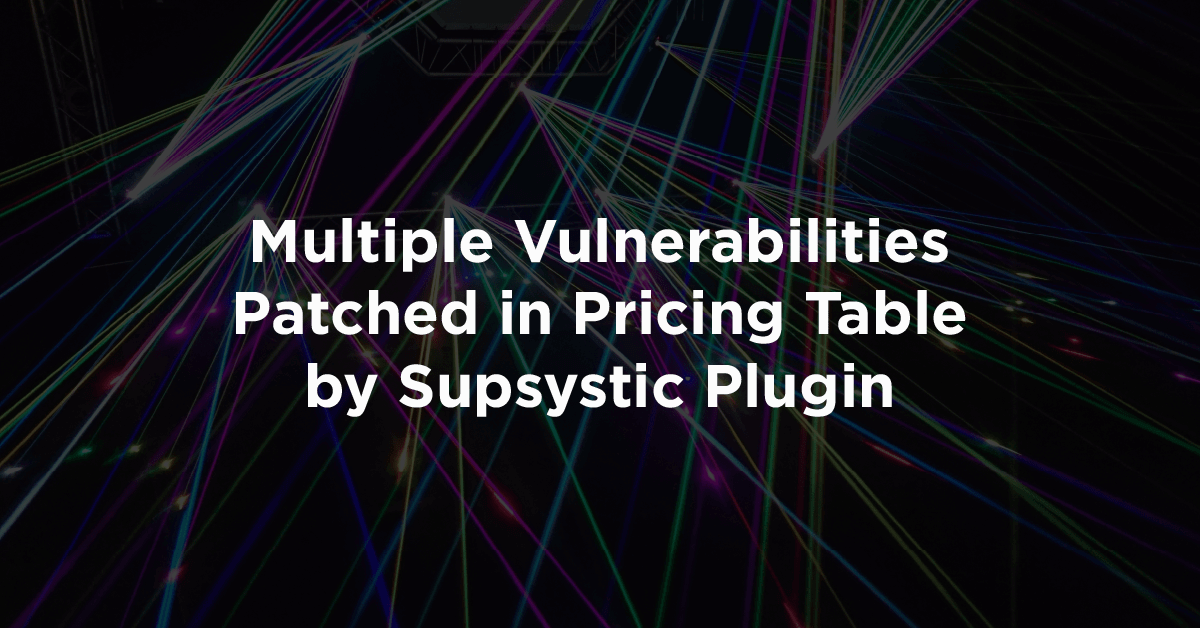 On January 17th, our Threat Intelligence Team discovered several vulnerabilities in Pricing Table by Supsystic, a WordPress plugin installed on over 40,000 sites. These flaws allowed an unauthenticated user to execute several AJAX actions due to an insecure permissions weakness. Attackers were also able to inject malicious Javascript due to a Cross-Site Scripting (XSS) vulnerability, access pricing table data, and forge requests on behalf of a site administrator because of a Cross-Site Request Forgery (CSRF) vulnerability.

These vulnerabilities could allow attackers the ability to run malicious Javascript on a visitor’s browser that could redirect site visitors to malicious websites, or even steal user cookies to authenticate as an administrator. We privately disclosed these issues to the plugin’s author, who released patches a month later.

We highly recommend updating to version 1.8.2 immediately as these security issues are fully patched in that version.

Pricing Table by Supsystic provides users with the ability to easily add customizable pricing tables to their site. These can be used to display pricing for products or services and compare the differences between each offering. The plugin makes it easy to create new tables, import or modify tables, and export pricing table settings, all of which are powered by AJAX actions. While analyzing the plugin, we discovered that the AJAX actions were registered with a wp_ajax_nopriv_ hook, allowing any unauthenticated user the ability to successfully send an AJAX request completing an action registered with that hook.

Upon further analysis, we found that despite the the actions being registered with a wp_ajax_nopriv_ hook, there was a separate security permission check on nearly all of the AJAX actions. However, we found that the permissions check was missing for a few select actions. The actions missing a permission check were: createFromTpl, a function that creates new pricing tables, getJSONExportTable, a function used to export existing tables, and importJSONTable, a function used to import a new pricing table or update an old one.

**You can see in this code snippet that getJSONExportTable, importJSONTable, and createFromTpl are missing from the getPermissions check at the bottom of the controller.php file. These were added in the latest version of the plugin.

This meant that any unauthenticated user could execute those 3 functions and obtain sensitive information regarding any given pricing table while creating and importing new pricing tables or altering already existing ones. 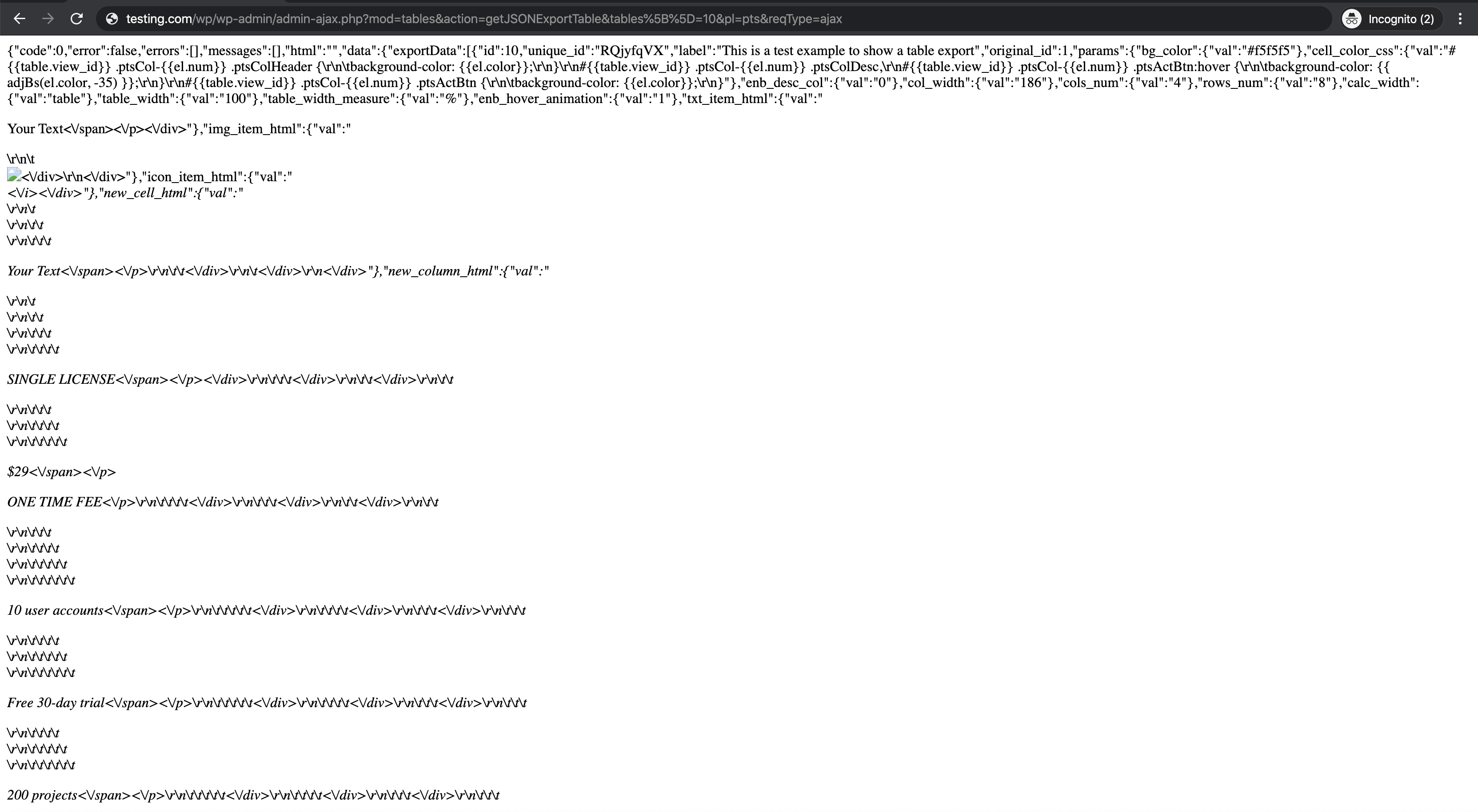 As an extension of the previous vulnerability, we discovered a stored XSS vulnerability could be exploited from the importJSONTable endpoint. This function is used to import a JSON body containing all of the settings needed to create a new pricing table or edit an already existing one.

Several of the parameters are handled without any input sanitization, allowing Javascript as an input. Alone, this wouldn’t be considered a security issue as user input supplied via the administrative dashboard isn’t sanitized due to the fact that administrators have the capability to add unfiltered_html. However, when combined with a situation where AJAX actions can be sent with no authentication, an XSS vulnerability is created.

In order to exploit this vulnerability, an attacker would need to send a request containing the details of the table they would like to modify, along with their malicious Javascript payload. This payload could be a script that steals user cookies and sends them off to an attacker for the attacker to gain administrative access to your site. Alternatively, this payload could also be a script that redirects users to a malicious site where their computer will be infected. The malicious javascript would then be executed anytime a user navigated to the page with the stored script.

Here is what it would look like if just the name parameter was injected in the data label parameter and executed in the administrative dashboard. 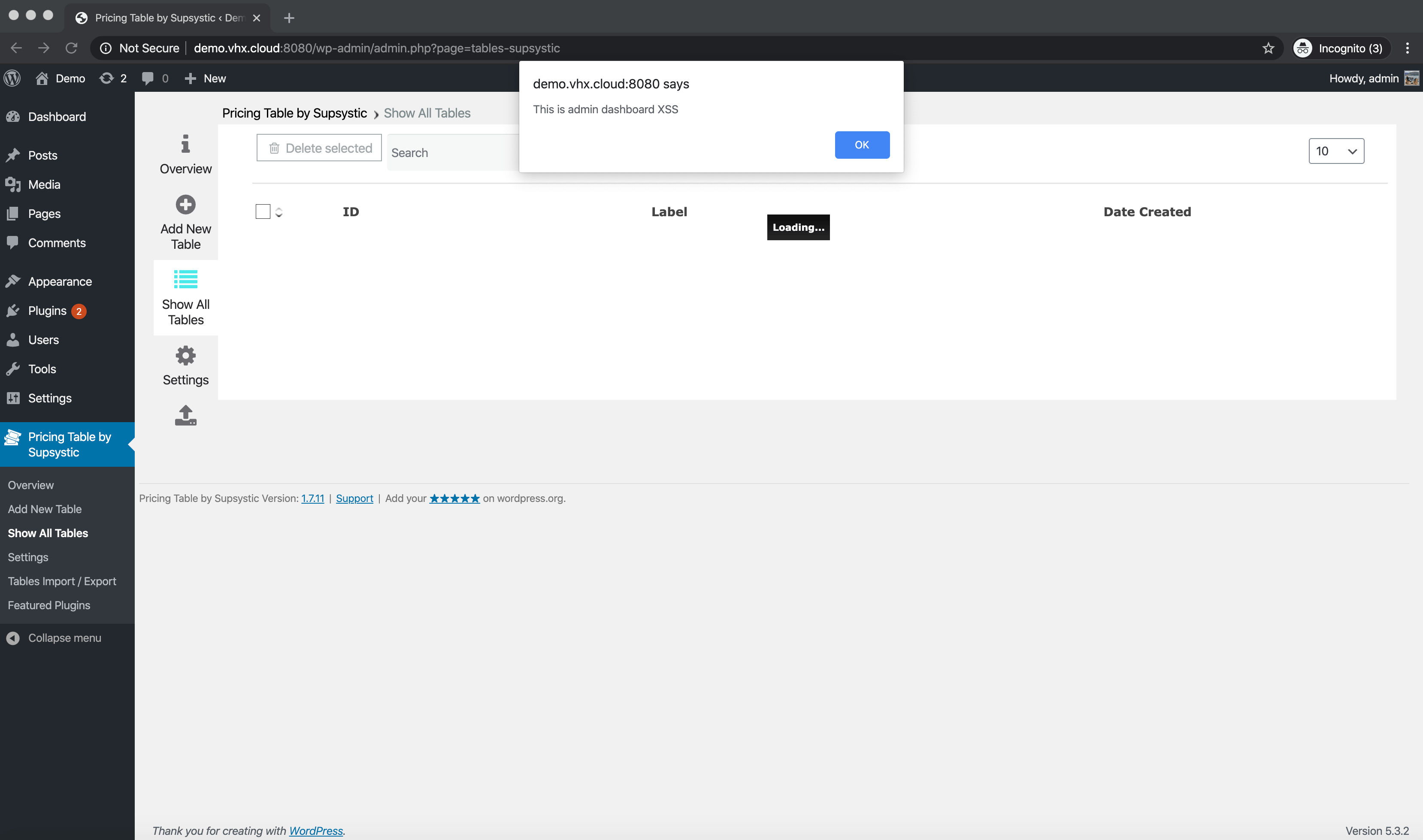 Here is what it would look like if the custom html parameter was injected, executing on the front-end of a site. 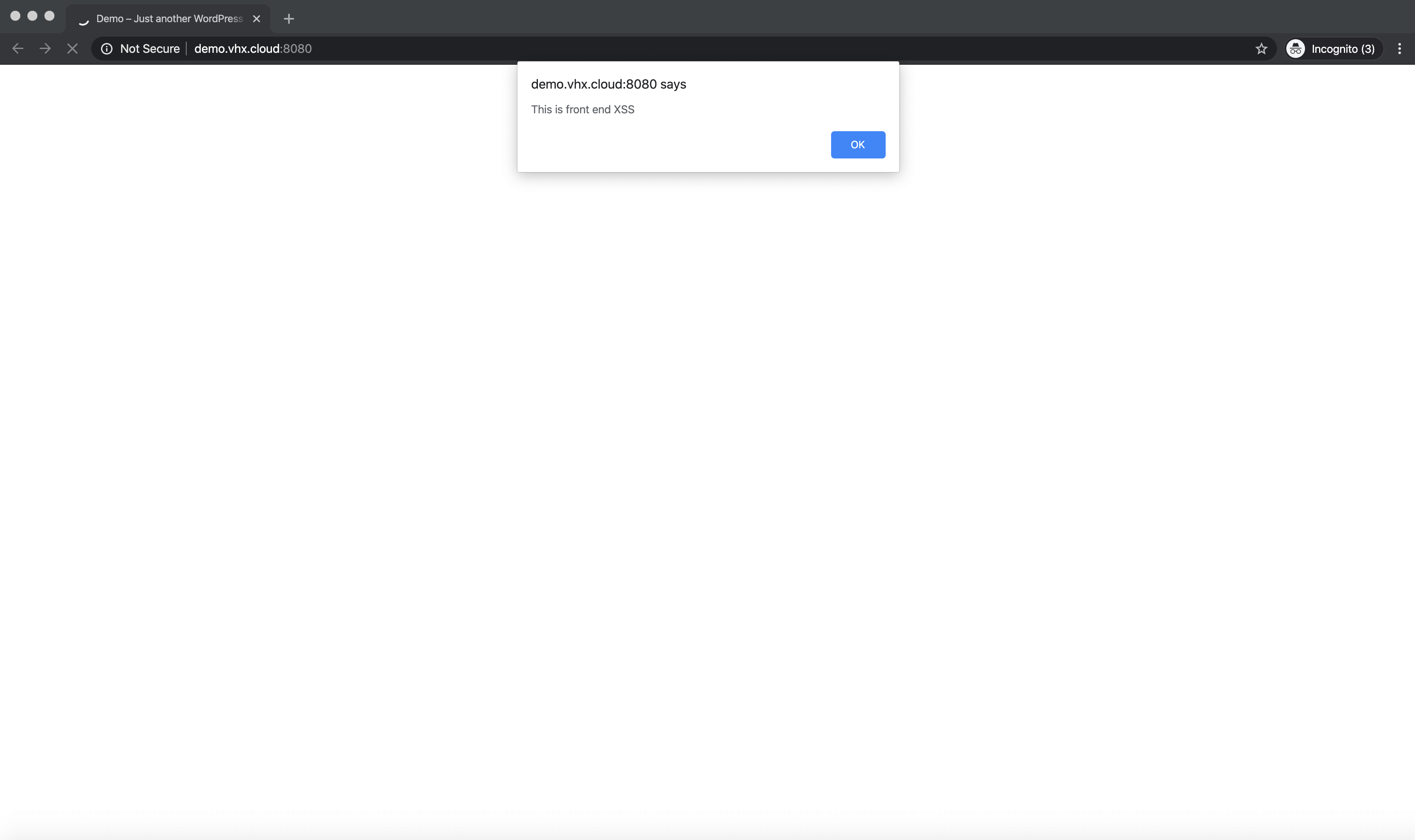 To further escalate, we found that none of the endpoints in the plugin were protected by WordPress nonces for CSRF protection. The source of requests were not verified and an attacker could forge a crafted request on behalf of a site administrator and inject malicious Javascript or simply modify the settings of any given pricing table.

In today’s post, we detailed several vulnerabilities including stored XSS, CSRF, and insecure permissions found in the Pricing Table by Supsystic plugin. These flaws have been patched in version 1.8.2 and we recommend that users update to the latest version available immediately. Sites running Wordfence Premium have been protected from attacks against this vulnerability since January 18th. Sites running the free version of Wordfence received the same firewall rule update on February 17th, 2020.