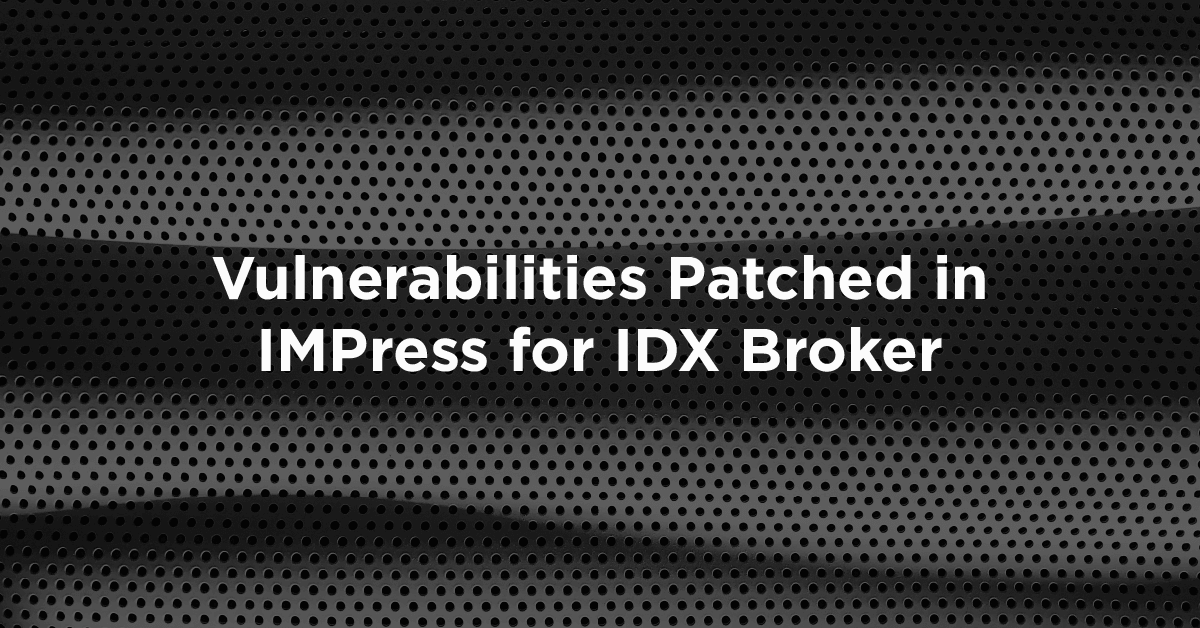 On February 28, 2020, the Wordfence Threat Intelligence team became aware of a newly patched stored Cross-Site Scripting (XSS) vulnerability in IMPress for IDX Broker, a WordPress plugin with over 10,000 installations. Although all Wordfence users, including those still using the free version of Wordfence, were already protected from this vulnerability by the Web Application Firewall’s built-in XSS protection, we investigated the plugin further and discovered an additional stored XSS vulnerability. We also found a flaw that would allow an authenticated attacker with minimal, subscriber-level permissions to permanently delete any page or post on the site, in addition to creating pages with arbitrary titles.

We initially reached out to the plugin’s vendor the same day, on February 28, 2020, but received no response over an extended period of time. On March 19, 2020, after notifying the WordPress plugin team, we received a response from the plugin’s developer, at which time we sent the full disclosure details. A fully patched version was released on March 23, 2020, and we recommend updating to the latest version, 2.6.2, immediately.

The IMPress for IDX Broker plugin contains a captcha feature to prevent spam submissions. Since it uses Google’s ReCAPTCHA service, it requires an API key. Unfortunately, the AJAX action the plugin registered to update this API key did not use capability checks or nonce checks.

This made it  possible for a logged-in attacker with minimal permissions, such as a subscriber, to send a request to wp-admin/admin-ajax.php with the action parameter set to idx_update_recaptcha_key and the idx_recaptcha_site_key parameter set to a malicious JavaScript, which could then be executed in an administrator’s browser the next time they visited the plugin’s settings panel.

As with most attacks taking advantage of stored XSS in admin areas, this could be used to make use of the administrator’s session in order to create a new, malicious administrative user.

One of the features included with the IDX Broker plugin is the ability to create and delete “dynamic pages,” intended to ensure that any IDX pages match the site’s style and branding.

The plugin registers 2 AJAX actions that are used to do this:

Once again, neither of the functions called by these AJAX actions used capability checks or nonce checks. As such it was possible for an authenticated attacker with minimal, subscriber-level, permissions to send a request to wp-admin/admin-ajax.php with the action parameter set to create_dynamic_page and the post_title parameter set to any arbitrary value. In return, a new dynamic page with that title would be created.

If a wrapper_page_id parameter was included and set to the ID of an existing post or page, that post or page would be replaced with a blank wrapper page:

Alternatively, if the attacker set the action parameter to delete_dynamic_page and sent a wrapper_page_id parameter with the ID of an existing post or page, then that post or page would be permanently deleted:

In today’s post, we detailed several vulnerabilities including stored XSS and Post creation, modification, and deletion found in the IMPress for IDX Broker plugin. These flaws have been patched in version 2.6.2, and we recommend that users update to the latest version available immediately. Sites running Wordfence Premium have been protected from attacks against this vulnerability since March 2, 2020. Sites running the free version of Wordfence received the firewall rule update on April 1, 2020.