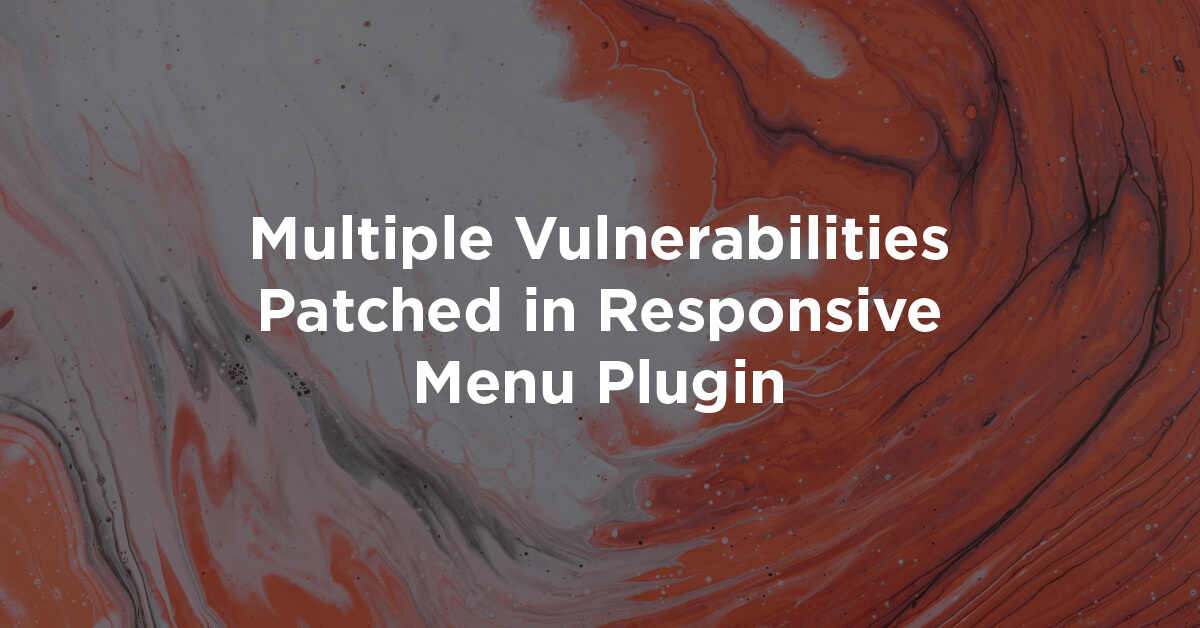 On December 17, 2020, our Threat Intelligence team responsibly disclosed three vulnerabilities in Responsive Menu, a WordPress plugin installed on over 100,000 sites. The first flaw made it possible for authenticated attackers with low-level permissions to upload arbitrary files and ultimately achieve remote code execution. The remaining two flaws made it possible for attackers to forge requests that would modify the settings of the plugin and again upload arbitrary files that could lead to remote code execution. All three vulnerabilities could lead to a site takeover, which could have consequences including backdoors, spam injections, malicious redirects, and other malicious activities.

We initially attempted to reach out to the team at Responsive Menu through their parent company ExpressTech on December 17, 2020 . After receiving no response for a few weeks, we tried reaching out through the contact form on the Responsive Menu site on January 4, 2021, and again received no response after a week. At that point we felt it best to escalate the issue to the WordPress Plugins team on January 10, 2021. We received a response from the plugins team and the plugin’s founder thereafter on January 11, 2021. Once contact was established, they were very quick to resolve the issues and released a patch on January 19, 2021.

Wordfence Premium users received a firewall rule to protect against any exploits targeting these vulnerabilities on December 17, 2020. Sites still using the free version of Wordfence received the same protection on January 16, 2021.

Responsive Menu is a plugin designed to create highly responsive and customizable menus for WordPress sites. It contains several features that allow users to easily create a beautiful menu interface with different colors and designs. As part of the plugin’s functionality, site owners have the option to import themes from zip files that can either by custom creations or downloaded from the Responsive Menu site. In order to provide this functionality, the plugin registered an admin_post action, admin_post_rmp_upload_theme_file, tied to the function rmp_upload_theme.

The rmp_upload_theme function takes a zip file supplied by the admin_post request and extracts its contents to the /rmp-menu/themes/ directory.

Unfortunately, there were no capability checks on this function, and due to the fact that it used admin_post, any user logged into a vulnerable WordPress site could execute this action to trigger the file upload and zip extraction. This included subscribers and other low level users, making sites with open registration particularly vulnerable. The admin_post action does not check to see whether a user is an administrator, but rather if the user is sending a request to the administrative page /wp-admin/admin-post.php while authenticated.

A subscriber could upload zip archives containing malicious PHP files that would get extracted to the /rmp-menu/themes/ directory. These files could then be accessed via the front end of the site to trigger remote code execution and ultimately allow an attacker to execute commands to further infect a WordPress site.

In addition, there were no nonce checks on this function making it vulnerable to Cross-Site Request Forgery attempts as well.

This feature was introduced in version 4.0.0 of the plugin, therefore, only site running versions 4.0.0 – 4.0.3 of this plugin are considered vulnerable.

If the responsive-menu-import-theme parameter was sent in a request, it triggered the import_theme function to start a theme import. This involved uploading and extracting the files from the supplied zip archive to the /responsive-menu-themes folder.

Though there was a permission check on this functionality that made it so that only administrators could trigger a theme import, there were no nonce checks to verify that a request came from a currently authenticated administrator’s session. This meant that attackers could craft a request and trick an administrator into uploading a zip archive containing malicious PHP files. The attacker could then access those files to achieve remote code execution and further infect the targeted site.

Since this plugin underwent a major overhaul, this is considered a legacy feature. Only sites running versions older than 4.0.0 or running in legacy mode on versions 4.0.0 – 4.0.3 are considered vulnerable.

Again, although there was a permission check on this functionality restricting settings import to administrators, there were no nonce checks to verify that a request came from a currently authenticated administrator’s session. This meant that attackers could craft a request and trick an administrator into importing all new settings. These settings could be modified to include malicious JavaScript, therefore allowing an attacker to inject payloads that could aid in further infection of the site.

Since this plugin underwent a major overhaul, this is considered a legacy feature. Only sites running versions older than 4.0.0 or running in legacy mode on versions 4.0.0 – 4.0.3 are considered vulnerable.

In today’s post, we detailed three flaws in the Responsive Menu plugin that granted attackers the ability to achieve remote code execution through arbitrary file uploads and to change settings. These flaws have been fully patched in version 4.0.4. We recommend that users immediately update to the latest version available, which is version 4.0.4 at the time of this publication.

Wordfence Premium users received firewall rules protecting against this vulnerability on December 17, 2020, while those still using the free version of Wordfence received the same protection on January 16, 2021.

If you know a friend or colleague who is using this plugin on their site, we highly recommend forwarding this advisory to them to help keep their sites protected as these are considered critical severity issues that can result in remote code execution.

Note: We have requested that the plugin’s owner add further security hardening to the import of zip files. Though we received confirmation from the plugin owner that they would work on implementing this, it has been nearly a month with no visible progress on this request. Given the severity of the vulnerabilities already patched, we are publishing this advisement now so that site owners can update and protect their sites. We consider the remaining issue of significantly lower impact, as it would only affect very rare WordPress installations. We anticipate that they will soon resolve this issue, and we will update this post when completed.