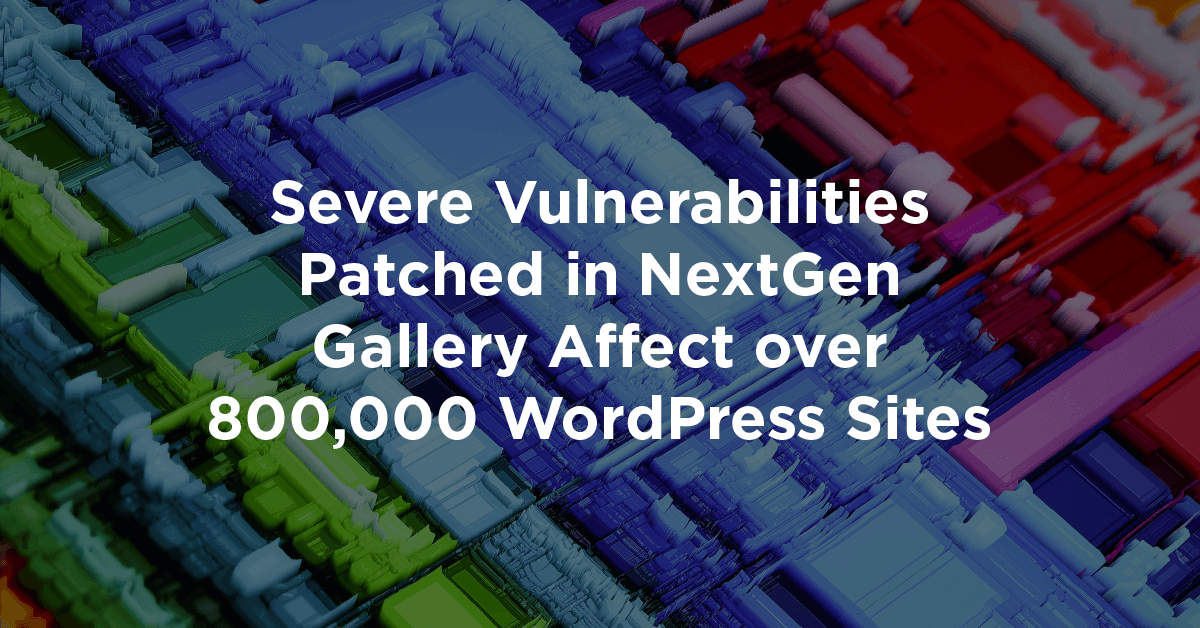 On December 14, 2020, the Wordfence Threat Intelligence team finished researching two Cross-Site Request Forgery (CSRF) vulnerabilities in NextGen Gallery, a WordPress plugin with over 800,000 installations, including a critical severity vulnerability that could lead to Remote Code Execution(RCE) and Stored Cross-Site Scripting(XSS). Exploitation of these vulnerabilities could lead to a site takeover, malicious redirects, spam injection, phishing, and much more.

We initially reached out to the plugin’s publisher, Imagely, the same day, and provided full disclosure the next day, on December 15, 2020. Imagely sent us patches for review on December 16, and published the patched version, 3.5.0, on December 17, 2020.

NextGEN Gallery is a popular WordPress plugin designed to create highly responsive image galleries. It is clear the plugin’s developer took care to integrate security in the code of the plugin. NextGen Gallery has a single security function, is_authorized_request, that is used to protect most of its settings:

This function integrated both a capability check and a nonce check into a single function for easier application throughout the plugin. Unfortunately, a logic flaw in the is_authorized_request function meant that the nonce check would allow requests to proceed if the $_REQUEST[‘nonce’] parameter was missing, rather than invalid.

This opened up a number of opportunities for attackers to exploit via Cross-Site Request Forgery. One feature of NextGen Gallery is the ability for administrators to upload custom CSS files to be used to style galleries. While the file uploaded had to end with the .css extension, it was possible to upload arbitrary code with double extensions, (e.g., file.php.css). While these files would only be executable on certain configurations, such as Apache/mod_php with an AddHandler directive, this could still result in remote code execution on any vulnerable configurations.

Unfortunately, it was also possible to achieve code execution even on configurations not vulnerable to double extensions. NextGen Gallery has a separate feature that allows users to specify how galleries are viewed via a “Legacy Templates” feature, which also uses the is_authorized_request function for security. Thus, it was possible to set various album types to use a template with the absolute path of the file uploaded in the previous step, or perform a directory traversal attack using the relative path of the uploaded file, regardless of that file’s extension, through a CSRF attack.

As a reminder, once an attacker achieves Remote Code Execution on a website, they have effectively taken over that site. XSS can likewise be used to take over a site if a logged-in administrator visits a page running a malicious injected script.

This attack would likely require some degree of social engineering, as an attacker would have to trick an administrator into clicking a link that submitted crafted requests to perform these actions. Additionally, performing these actions would require 2 separate requests, though this would be trivial to implement and we were able to do so during our testing. Finally, the site would require at least one album to be published and accessible to the attacker.

This function had a similar logic flaw that would allow requests to proceed if the $_REQUEST[‘nonce’] parameter was missing, rather than invalid.

This made it possible to trick an administrator into submitting a request crafted to upload an arbitrary image file. While the uploaded file had to be a valid image file, it is possible to hide a webshell or other executable PHP code within such an image file.

This could also be combined with the previous vulnerability, and the image file could be set as a “Legacy Template”, at which point it would be included and the code within would be executed. Again, this would require some degree of social engineering, as an attacker would have to trick an administrator into clicking a link that resulted in these requests being sent.

December 14, 2020 – The Wordfence Threat Intelligence team finishes researching vulnerabilities in NextGen Gallery. We deploy firewall rules and reach out to Imagely.
December 15, 2020 – Imagely replies and we provide full disclosure.
December 16, 2020 – Imagely sends us a patched version of the plugin to review.
December 17, 2020 – A patched version of NextGen Gallery is made available to the public.
January 13, 2021 – Sites running the free version of Wordfence receive firewall rules.

In today’s post, we covered two vulnerabilities in NextGen Gallery, including a Critical Severity Cross-Site Request Forgery (CSRF) that could be used to take over a site via Remote Code Execution (RCE). These vulnerabilities have been fully patched in version 3.5.0, and we strongly recommend that site owners immediately update to the latest version available at this time, which is 3.5.0.

If you know a friend or colleague who is using this plugin on their site, we highly recommend forwarding this advisory to them to help keep their sites protected as these are critical and high severity vulnerabilities that can lead to full site takeover.

Special thanks to Threat Analyst Chloe Chamberland, who helped analyze this vulnerability, as well as to the plugin’s publisher, Imagely, for their fast and professional response.