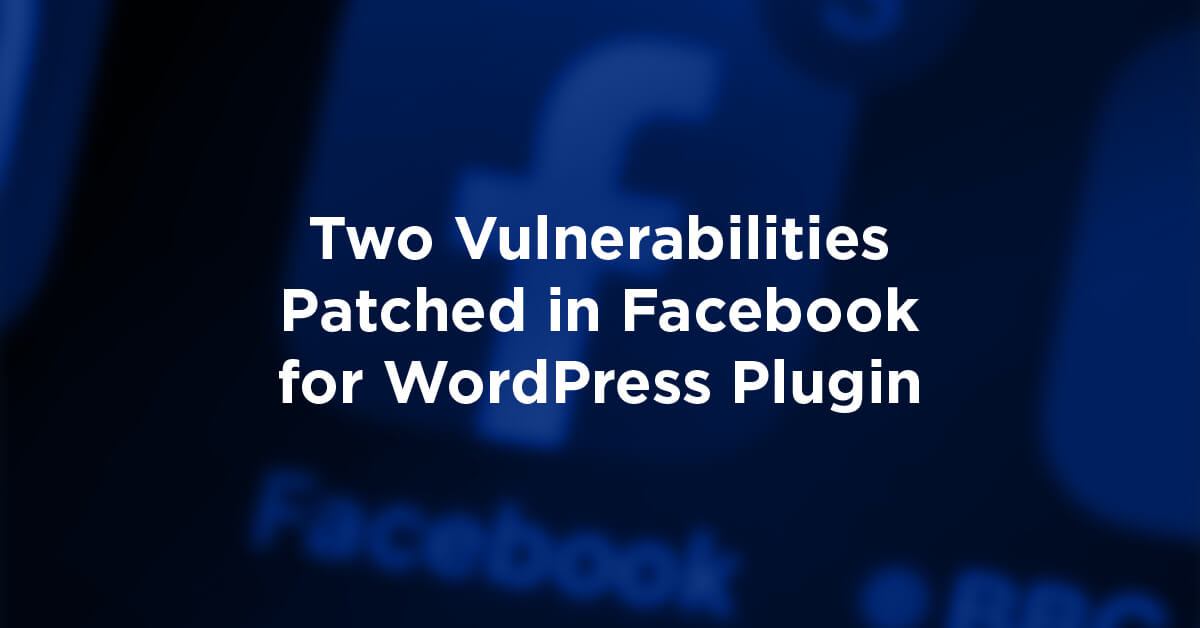 On December 22, 2020, our Threat Intelligence team responsibly disclosed a vulnerability in Facebook for WordPress, formerly known as Official Facebook Pixel, a WordPress plugin installed on over 500,000 sites. This flaw made it possible for unauthenticated attackers with access to a site’s secret salts and keys to achieve remote code execution through a deserialization weakness.

In addition, on January 27, 2021, we disclosed a separately identified vulnerability in Facebook for WordPress that was introduced in the rebranding of the plugin in version 3.0.0. This flaw made it possible for attackers to inject malicious JavaScript into the plugin’s settings, if an attacker could successfully trick an administrator into performing an action such as clicking a link.

We initially reached out to Facebook’s security team on December 22, 2020 for the first vulnerability and included the full disclosure details at the time of reaching out. They initially responded on December 25, 2020 requesting further information which was supplied on December 26, 2020. A patch was released on January 6, 2021.

These are considered high and critical severity vulnerabilities. Therefore, we highly recommend updating to the latest version available containing both patches, 3.0.5, immediately.

Facebook for WordPress is a plugin designed to create a seamless integration between Facebook Pixel, a conversion measurement tool, and a WordPress site. The plugin will monitor site traffic and record data when users access pages and perform certain actions on a site.

The plugin registered an admin_post action, admin_post_wp_async_send_server_event, so that both the ViewContent and AddToCart events would be triggered at the same time when WooCommerce customers added products to their cart.

This action was hooked to the handle_postback function that ultimately checked for a valid nonce and triggered the run_action() function when a valid nonce was supplied.

Due to the handle_postback function requiring a valid nonce, an attacker would need a valid nonce in order to exploit this vulnerability. The generated nonce did not use normal user data when creating a nonce, making the nonce unrelated to any user sessions. We discovered that this nonce could easily be generated with a custom script. This required that an attacker gain access to the site’s nonce salt and key either through a SQL injection vulnerability, a directory traversal vulnerability, or a publicly accessible backup of the wp-config.php file.

The core of the PHP Object Injection vulnerability was within the run_action() function. This function was intended to deserialize user data from the event_data POST variable so that it could send the data to the pixel console. Unfortunately, this event_data could be supplied by a user. When user-supplied input is deserialized in PHP, users can supply PHP objects that can trigger magic methods and execute actions that can be used for malicious purposes.

On its own, a deserialization vulnerability is relatively harmless, however, when combined with a gadget, or magic method, significant damage can be done to a site. In this case, we did find a magic method within the plugin that could be used to upload arbitrary files and achieve remote code execution on a vulnerable target.

The Facebook for WordPress plugin uses Guzzle, a PHP HTTP client, which has the __destruct magic method used in the FileCookieJar class. This method saves a file when shutting down to store sessions cookies. This meant that a properly constructed payload that calls the FileCookieJar class could allow an attacker to create a file.

We were able to construct the following payload, with the use of an external tool, PHPGGC, that calls the FileCookieJar class once deserialized. This payload sets the FileCookieJar filename to /var/www/html/new.php, which is the path and filename of the file that will be created during deserialization. The SetCookie data parameter sets the malicious PHP payload in the newly created file to:<?php phpinfo();?>. Finally, it also sets a few other values like FileCookieJar storeSessionCookies to enabled and SetCookie to true.

This meant that an attacker could generate a PHP file new.php in a vulnerable site’s home directory with the contents <?php phpinfo();?>. The PHP file contents could be changed to anything, like <?php shell_exec($_GET['cmd']);?>  which would allow an attacker to achieve remote code execution.

Note that the presence of a full POP chain also meant that any other plugin with an object injection vulnerability, including those that did not require knowledge of the site’s salts and keys, could potentially be used to achieve remote code execution as well if it was installed on a site with the Facebook for WordPress plugin.

In addition to the PHP Object Injection vulnerability, we discovered a Cross-Site Request Forgery to Stored Cross-Site Scripting vulnerability in the updated version of the plugin. In version 3.0.0, the developers rewrote much of the plugin’s code while rebranding and introducing some new functionality.

One of the changes they made while updating the plugin addressed the functionality behind saving the plugin’s settings. This was converted to an AJAX action to make the integration process more seamless. The new version introduced the wp_ajax_save_fbe_settings AJAX action tied to the saveFbeSettings function.

There was a permission check on this function, blocking users lower than administrators from being able to access it, however, there was no nonce protection. This meant that there was no verification that a request was coming from a legitimate authenticated administrator session. This made it possible for attackers to craft a request that would be executed if they could trick an administrator into performing an action while authenticated to the target site.

The action could be used by an attacker to update the plugin’s settings to point to their own Facebook Pixel console and steal metric data for a site. Worse yet, since there was no sanitization on the settings that were stored, an attacker could inject malicious JavaScript into the setting values. These values would then be reflected on the settings page, causing the code to execute in a site administrator’s browser while accessing the settings page. Ultimately, this code could be used to inject malicious backdoors into theme files or create new administrative user accounts that could be used for complete site takeover.

In addition to the AJAX action used to update settings, there was an AJAX action wp_ajax_delete_fbe_settings hooked to the deleteFbeSettings function. This function was used to erase the plugin’s settings. It also lacked the appropriate nonce protection, making it possible for attackers to reset plugin settings through CSRF. Though it could be annoying for the plugin’s settings to be reset, and it could cause a brief loss of metric data, there was no overly impactful harm that could be done on a WordPress site with this vulnerability.

December 22, 2020 – Conclusion of the plugin analysis that led to the discovery of the PHP Object Injection vulnerability in Facebook for WordPress. We develop firewall rules to protect Wordfence customers and release them to Wordfence Premium users. We initiate contact with the Facebook Pixel security team. We receive automated responses confirming receipt of our report.
December 25, 2020 – We receive a response requesting additional information.
December 28, 2020 – We send additional requested details.
January 4, 2021 – We receive confirmation that the plugin developers were able to duplicate our report and have begun working on a fix.
January 6, 2021 – A patched version of the plugin is released as version 3.0.0. We verify that the vulnerability has been patched.
January 21, 2021 – Free Wordfence users receive firewall rule.

January 27, 2021 – Conclusion of the plugin analysis that led to the discovery of the CSRF to Stored XSS vulnerability in Facebook for WordPress. We develop firewall rules to protect Wordfence customers and release them to Wordfence Premium users. We initiate contact with the Facebook Pixel security team. We receive automated responses confirming receipt of our report.
February 1, 2021 – We receive a response requesting additional information. We send additional details the same day.
February 5, 2021 – We receive confirmation that the plugin developers were able to duplicate our report and have begun working on a fix.
February 12, 2021 – A patched version of the plugin is released as version 3.0.3.
February 15, 2021 –We follow up to inform the plugin developers of missing sanitization on the stored settings leading to an insufficient patch.
February 17, 2021 – An additional and fully sufficient patch is released.
February 26, 2021 – Free Wordfence users receive firewall rule.

In today’s post, we detailed two flaws in the Facebook for WordPress plugin that granted attackers the ability to achieve remote code execution due to a PHP Object Injection vulnerability and inject malicious JavaScript due to a CSRF vulnerability, both of which can be used for complete site takeover. The flaws are both fully patched in version 3.0.4. We recommend that users immediately update to the latest version available, which is version 3.0.5 at the time of this publication.

If you know a friend or colleague who is using this plugin on their site, we highly recommend forwarding this advisory to them to help keep their sites protected as these are severe vulnerabilities that can result in remote code execution and full site compromise.