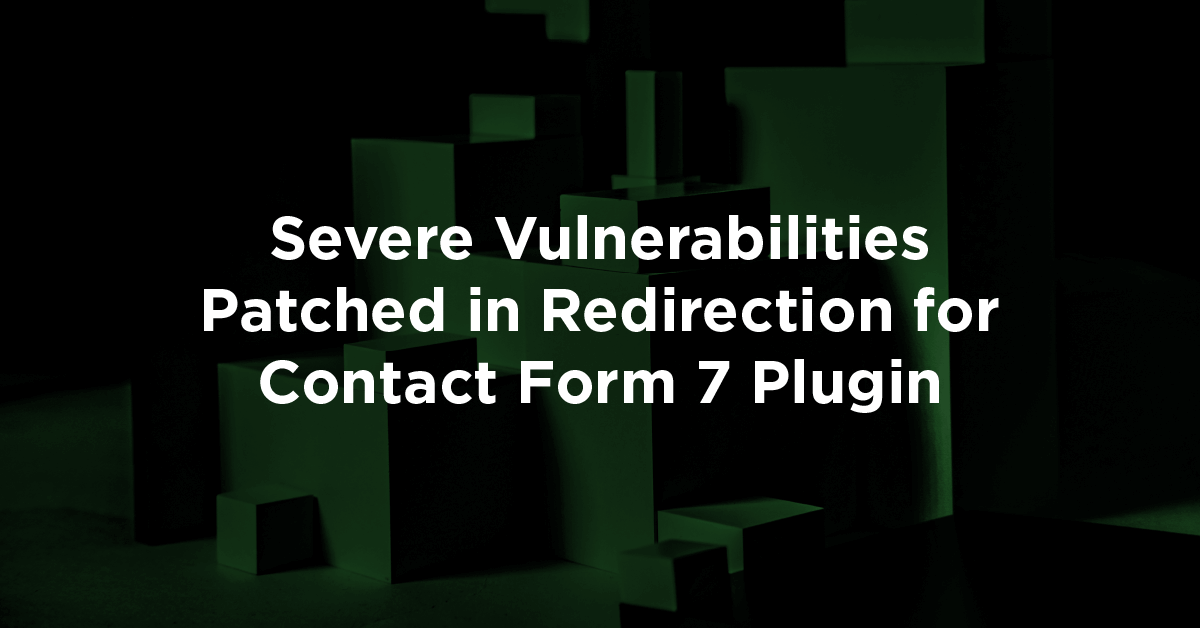 Wordfence Premium users received a firewall rule to protect against any exploits targeting these vulnerabilities on February 11, 2021. Sites still using the free version of Wordfence received the same protection on March 13, 2021.

Redirection for Contact Form 7 is a plugin designed to add redirects to forms created with the popular Contact Form 7 plugin so that users can be redirected immediately after submitting a form. The plugin offers several features like the ability to customize redirects, import settings, and more.

While reviewing the plugin’s code, we discovered a nopriv AJAX action that was not actually used anywhere in the plugin, wp_ajax_nopriv_wpcf7r_get_nonce, which was hooked to the wpcf7r_get_nonce function and made it possible to generate nonces.

More specifically, a user could set the param value to any value while triggering the AJAX action. The param value would then be supplied to the wp_create_nonce() function as the action value and create a valid nonce for any action, whether the user was logged in or not due to the use of a nopriv AJAX action. The function would then return the newly generated nonce back to the user.

At first glance, this doesn’t appear to be a significant vulnerability. However, there are a number of plugins in the WordPress repository that insecurely use nonce checks as a substitute for capability checks when enforcing access control. Unfortunately, this meant that this arbitrary nonce generation vulnerability could be used by any unauthenticated user to create a valid nonce. That valid nonce could then grant them access to sensitive functions in any plugin that used nonce checks as the sole means of access control.

Attackers could use this nonce generation vulnerability to perform a plethora of malicious actions, including complete site takeover depending on which other plugins were installed on the site.

One feature that Redirection for Contact Form 7 offers is the ability to import Contact Form 7 forms with their redirection settings along with plugins through their debug importing function. Unfortunately, this functionality was insecurely implemented.

The plugin registered the AJAX action wp_ajax_import_from_debug, which was tied to the import_from_debug function. This function had no capability checks, nor did it have any nonce protection, making it possible for an authenticated user on a site, including those with just subscriber-level privileges, to trigger the AJAX action and use the functionality of the feature.

This meant that authenticated users with very minimal permissions, like subscribers, could use this vulnerability to install any plugin from the WordPress repository. An attacker could use this to install plugins containing undisclosed vulnerabilities or other weaknesses and use them to take over a site. For instance, they could install a plugin that insecurely uses nonce protection for access control and combine it with the previous nonce generation vulnerability to further exploit a site.

Deserializing user-supplied data makes it possible for users to supply PHP Objects in a request to trigger the execution of other PHP classes. Unfortunately, this means that if there is an appropriate magic method, then attackers can do things like remote code execution and arbitrary file creation to completely take over a vulnerable WordPress site.

A magic method is a special PHP function that is added to a class to perform an action when certain conditions are met, like the deserialization of data. Magic methods are typically used to do things like delete files, create files, execute commands, and more which is why they are used with PHP Object injection vulnerabilities to perform harmful actions on a target site’s server. For more information on how PHP Object Injection and Magic Methods work, please see this post.

Redirection for Contact Form 7 registers redirects and other features as “actions.” You can easily create, duplicate, and remove these actions from any contact form at any time. In order to provide the delete functionality, the plugin registered the wp_ajax_wpcf7r_delete_action AJAX action hooked to the delete_action_post function.

The delete_action_post function checks for the data POST parameter, and if the data contains a ‘post_id’ it uses the wp_trash_post() function to delete the corresponding post id.

Unfortunately, there was no capability check on this action, nor was there any nonce protection, making it possible for any authenticated user, including those with minimal permissions like a subscriber, to delete any post on a vulnerable WordPress site. This could cause a loss of availability.

In addition to the four vulnerabilities detailed above, there were a few remaining AJAX actions that were unprotected by capability checks and nonces, making it possible for lower level users to execute them. The remaining AJAX actions were significantly less severe, however, attackers could do things like reset the plugin’s settings, add actions, delete actions, and more.

February 11, 2021 – Conclusion of the plugin analysis that led to the discovery of several vulnerabilities in the Redirection for Contact Form 7 plugin. We develop firewall rules to protect Wordfence customers and release them to Wordfence Premium users. We initiate contact with the plugin’s developer.
February 12, 2021 – The plugin’s developer confirms the inbox for handling discussion the next day. We send over full disclosure.
February 13, 2021 – A newly updated version of Redirection for Contact Form 7 is released containing patches for all of the vulnerabilities.
February 15, 2021 – We confirm the vulnerabilities have been patched.
March 13, 2021 – Free Wordfence users receive firewall rules.

In today’s post, we detailed several flaws in Redirection for Contact Form 7 that granted attackers the ability to generate nonces, install arbitrary plugins, delete arbitrary posts, and inject PHP Objects to execute code. These flaws have been fully patched in version 2.3.4. We recommend that users immediately update to the latest version available, which is version 2.3.5 at the time of this publication.

Wordfence Premium users received firewall rules protecting against these vulnerabilities on February 11, 2021, while those still using the free version of Wordfence received the same protection on March 13, 2021.

If you know a friend or colleague who is using this plugin on their site, we highly recommend forwarding this advisory to them to help keep their sites protected as these are severe vulnerabilities that can lead to full site takeover.

Special thank you to Lior Regev at Redirection for Contact Form 7 for an exceptionally fast response in patching the disclosed vulnerabilities.