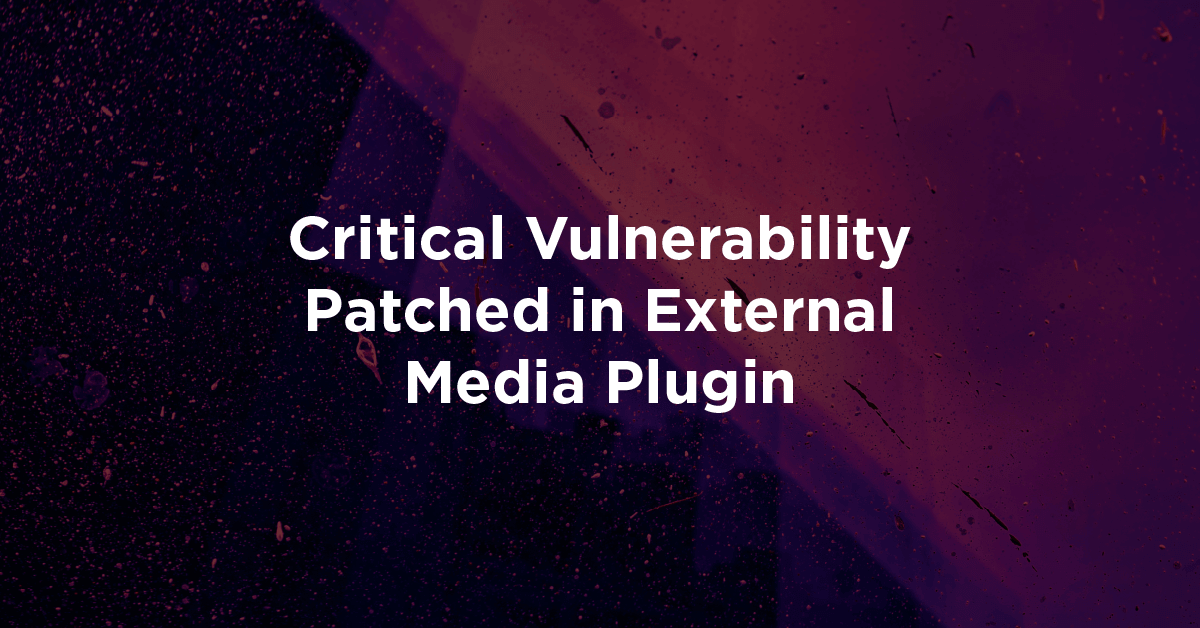 On February 2, 2021, our Threat Intelligence team responsibly disclosed the details of a vulnerability in External Media, a WordPress plugin used by over 8,000 sites. This flaw made it possible for authenticated users, such as subscribers, to upload arbitrary files on any site running the plugin. This vulnerability could be used to achieve remote code execution and take over a WordPress site.

We initially reached out to the plugin’s developer on February 2, 2021. After establishing an appropriate communication channel, we provided the full disclosure the same day. After several minor patches and follow-ups with the developer, a fully patched version was released as version 1.0.34.

This is considered a critical vulnerability. Therefore, we highly recommend updating to the latest patched version available, 1.0.34, immediately.

Wordfence Premium users received a firewall rule to protect against any exploits targeting this vulnerability on February 2, 2021. Sites still using the free version of Wordfence received the same protection on March 4, 2021.

The plugin registered an AJAX action, wp_ajax_upload-remote-file, that was tied to the upload_remote_file function. This function was used to obtain the remote file’s name, URL, and caption, in addition to a few other fields.

This information was used to load a “plugin” method to upload a file, and then trigger the download function which ultimately triggered the file upload function save_remote_file that saved the remote file to the server.

Unfortunately, there were no capability checks that verified if a user had the appropriate capabilities to upload a file, which allowed any user logged in the WordPress site running the plugin to upload files using the external media functionality. There were also no nonce checks, making it possible for an attacker to exploit this functionality using a cross-site request forgery attack.

In addition to missing capability and nonce checks, there was no validation on the filename that was being uploaded, which made it possible to set a PHP file extension. This effectively allowed authenticated users to upload PHP files to a vulnerable site that could be used for remote code execution, ultimately allowing an attacker to completely take over a vulnerable WordPress site.

February 2, 2021 – Conclusion of the plugin analysis that led to the discovery of a vulnerability in the External Media plugin. We develop a firewall rule to protect Wordfence customers and release it to Wordfence Premium users prior to initiating contact with the plugin’s developer.
February 2, 2021 – The plugin’s developer confirms the inbox for handling discussion. We send over full disclosure.
February 15, 2021 – A newly updated version of External Media is released containing a partial patch. We inform the developer of additional enhancements that are required.
February 15, 2021 – May 5, 2021 – Several follow-ups with the developer who remains in contact with us. A few partial patches are released during this time.
March 4, 2021 – Free Wordfence users receive firewall rules.
May 5, 2021 – Fully patched version of the plugin is released.

In today’s post, we detailed a flaw in External Media that granted authenticated attackers the ability to upload arbitrary files onto a vulnerable site’s server and achieve remote code execution. This flaw has been fully patched in version 1.0.34. We recommend that all users immediately update to the latest version available, which is version 1.0.34 at the time of this publication.

Wordfence Premium users received firewall rules protecting against this vulnerability on February 2, 2021, while those still using the free version of Wordfence received the same protection on March 4, 2021.

If you know a friend or colleague who is using this plugin on their site, we highly recommend forwarding this advisory to them to help keep their sites protected as this is a critical vulnerability that can lead to full site takeover.