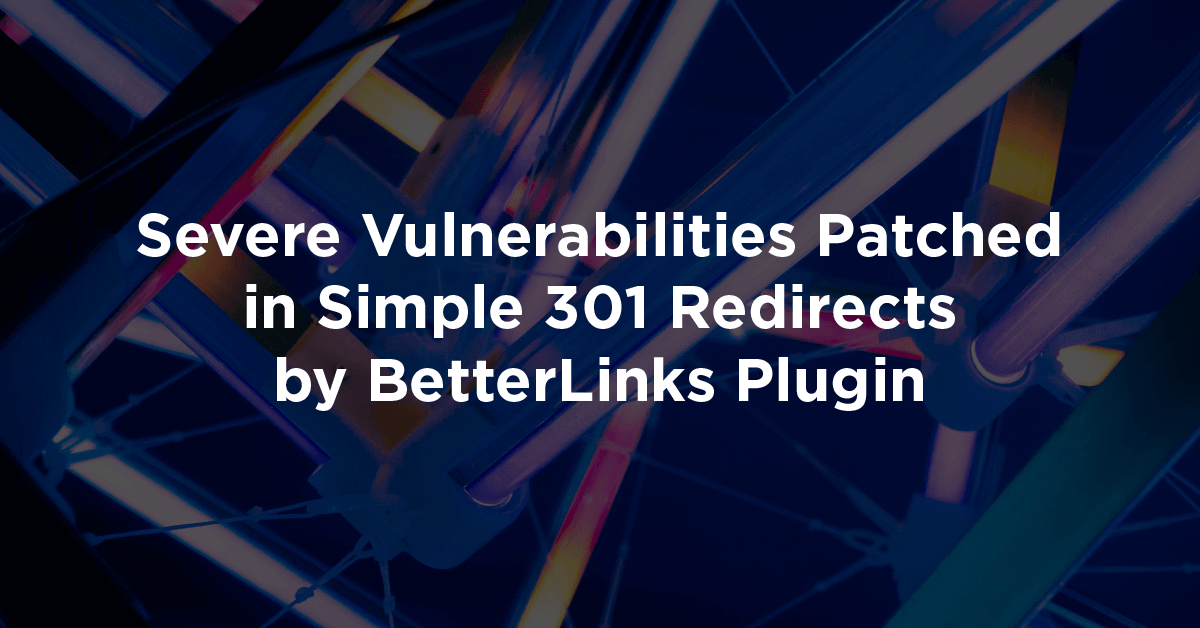 On April 8, 2021, the Wordfence Threat Intelligence team initiated the responsible disclosure process for several vulnerabilities discovered in Simple 301 Redirects by BetterLinks, a WordPress plugin installed on over 300,000 sites. One of these flaws made it possible for unauthenticated users to update redirects for the site allowing an attacker to redirect all site traffic to an external malicious site. In addition, there were several remaining flaws that made it possible for authenticated users to perform actions like installing and activating plugins, in addition to less critical actions.

We initially reached out to the plugin’s developer on April 8, 2021. After establishing an appropriate communication channel, we provided the full disclosure details on April 11, 2021. An initial patch was released on April 15, 2021, and a fully patched version of the plugin was released on May 5, 2021 as version 2.0.4.

Some of these vulnerabilities are considered critical. Therefore, we highly recommend updating to the latest patched version available, 2.0.4, immediately.

Wordfence Premium users received a firewall rule to protect against any exploits targeting these vulnerabilities on April 8, 2021. Sites still using the free version of Wordfence received the same protection on May 8, 2021.

Simple 301 Redirects by BetterLinks is a simple plugin designed to create 301 redirects on WordPress sites. In version 2.0.0 of the plugin, they introduced several new features and made additional enhancements. One of the features they introduced in the update was the ability to import and export redirects. Unfortunately, this functionality was insecurely implemented.

The developer registered two admin_init action hooks to the following functions: import_data and export_data. Neither of the corresponding functions had capability checks or nonce checks making it possible for users without the proper authorization to trigger the execution of the functions.

An attacker could use this to set redirects that would deny access to a vulnerable WordPress site, causing a loss of availability, and/or redirect site visitors to malicious sites to further infect the victims’ computers.

In addition to the newly implemented import functionality, the updated version of the plugin also implemented a function to install other plugins they have developed, such as BetterLinks, via a prompt in the wp-admin dashboard. In order to provide this functionality, the plugin registered the AJAX action wp_ajax_simple301redirects/admin/install_plugin, which was hooked to the install_plugin function.

The install_plugin function could be used to install any plugin from the WordPress repository by supplying the desired plugin’s name as the ‘slug’ parameter. This function did not have a capability check to verify that the action was triggered by an authenticated user, though it did have a nonce check.

Unfortunately, this nonce check used the wp_rest action for validation. Due to the fact that this is effectively a REST-API nonce, a user could generate a valid nonce using the rest-nonce AJAX action that is a part of WordPress core and open to any authenticated user. This made it possible for a user to pass the nonce validation and use the plugin installation function.

In addition, an authenticated user could activate the installed plugin, or any other plugin installed on the site, by using the wp_ajax_simple301redirects/admin/activate_plugin AJAX endpoint hooked to the activate_plugin function.

These functions would make it possible for an authenticated attacker to install and activate any plugin from the WordPress repository, potentially one with a more severe vulnerability, that could be used to further infect and escalate privileges on the vulnerable site.

The corresponding functions to these action hooks, get_wildcard and wildcard, had no capability checks and suffered from the same nonce flaw as the arbitrary plugin installation and activation AJAX functions.

April 8, 2021 – Conclusion of the plugin analysis that led to the discovery of several vulnerabilities in the Simple 301 Redirects by BetterLinks plugin. We develop firewall rules to protect Wordfence customers and release them to Wordfence Premium users. We initiate contact with the plugin developer.
April 11, 2021 – The plugin developer confirms the inbox for handling discussion.
April 12 , 2021 – We send over full disclosure details.
April 15, 2021 – The plugin developer releases an initial set of patches. We review the patches and determine some protection is still missing. We follow-up with the developer to inform them of what still needs to be fixed.
April 18, 2021 – An additional patch is released.
April 19, 2021 – We analyze the patch and determine it is still missing some protection so we follow-up again to inform them what is missing.
April 21, 2021 – The developer confirms they will be working on the remaining fixes.
May 4, 2021 – We follow-up to check on the status of the patches, the developer confirms that they will be released shortly.
May 5, 2021 – A newly updated version of Simple 301 Redirects is released containing sufficient patches.
May 8, 2021 – Free Wordfence users receive firewall rules.

In today’s post, we detailed several flaws in Simple 301 Redirects by BetterLinks that granted unauthenticated attackers the ability to redirect all of a site’s visitors to an external malicious site, in addition to allowing authenticated attackers the ability to install and activate arbitrary plugins. These flaws have been fully patched in version 2.0.4. We recommend that users immediately update to the latest version available, which is version 2.0.4 at the time of this publication.

Wordfence Premium users received a firewall rule to protect against any exploits targeting these vulnerabilities on April 8, 2021. Sites still using the free version of Wordfence received the same protection on May 8, 2021.

If you know a friend or colleague who is using this plugin on their site, we highly recommend forwarding this advisory to them to help keep their sites protected as these are severe vulnerabilities that can lead to full site takeover.