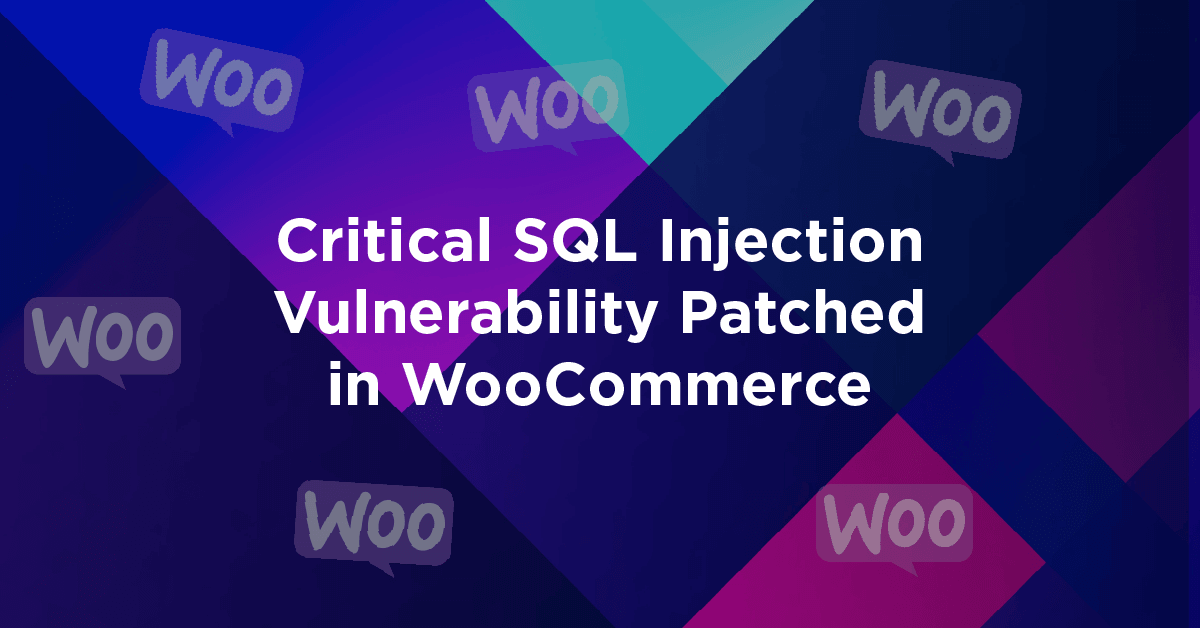 Update: The article originally credited Tommy DeVoss (dawgyg) for the discovery. We’ve since been contacted by Tommy, who let us know that the credit should go to another researcher, Josh from DOS (Development Operations Security)

On July 14, 2021, WooCommerce released an emergency patch for a SQL Injection vulnerability reported by a security researcher, Josh from DOS (Development Operations Security), based in Richmond Virginia. This vulnerability allowed unauthenticated attackers to access arbitrary data in an online store’s database.

The Wordfence Threat Intelligence team was able to develop proofs of concept for time-based and boolean-based blind injections and released an initial firewall rule to our Premium customers within hours of the patch. We released an additional firewall rule to cover a separate variant of the same attack the next day, on July 15, 2021.

Sites still running the free version of Wordfence will receive the same protection after 30 days, on August 13 and August 14, 2021.

We strongly recommend updating to a patched version of WooCommerce immediately if you have not been updated automatically, as this will provide the best possible protection.

The vulnerability affects versions 3.3 to 5.5 of the WooCommerce plugin and WooCommerce Blocks 2.5 to 5.5 plugin.

In the announcement by WooCommerce, Beau Lebens, the Head of Engineering for WooCommerce stated, “Upon learning about the issue, our team immediately conducted a thorough investigation, audited all related codebases, and created a patch fix for every impacted version (90+ releases) which was deployed automatically to vulnerable stores.”

Due to the critical nature of the vulnerability, the WordPress.org team is pushing forced automatic updates to vulnerable WordPress installations using these plugins. Store owners using older versions can update to the latest version in their branch. For example, if your storefront is using WooCommerce version 5.3, you can update to version 5.3.1 to minimize the risk of compatibility issues. Within the security announcement from WooCommerce, there is a table detailing the 90 patched versions of WooCommerce. Additionally, WooCommerce has a helpful guide for WooCommerce updates.

Has This Been Exploited in the Wild?

While the original researcher has indicated that this vulnerability has been exploited in the wild, Wordfence Threat Intelligence has found extremely limited evidence of these attempts and it is likely that such attempts were highly targeted.

If you think you have been exploited due to this vulnerability, the WooCommerce team is recommending administrative password resets after updating to provide additional protection. If you do believe that your site may have been affected, a review of your log files may show indications.

Update: We’re starting to see attack data trickle in. So far, all of the attacks are coming from just a few IP addresses:

Additionally, it appears that UNION-based SQL injection may be possible with this vulnerability, meaning that an attacker could retrieve information from the database much more quickly than is possible with blind injection.

We’re receiving reports of similar attacks dating back almost a month. While the older attacks we’ve been made aware of lack a crucial factor that would allow the exploit to be successful, it does appear that attackers have been attempting to exploit this vulnerability for some time.

Improving Security of the WordPress Ecosystem

Sites with e-Commerce functionality are a high-value target for many attackers, so it is critical that vulnerabilities in e-Commerce platforms are addressed promptly to minimize the potential damage that can be caused. With the growth of both WordPress and WooCommerce, more security researchers have turned attention to WordPress related products. The rapid and deep response that the WooCommerce team performed in protecting WooCommerce users is a great sign for the ongoing security of e-Commerce in the open source WordPress ecosystem.