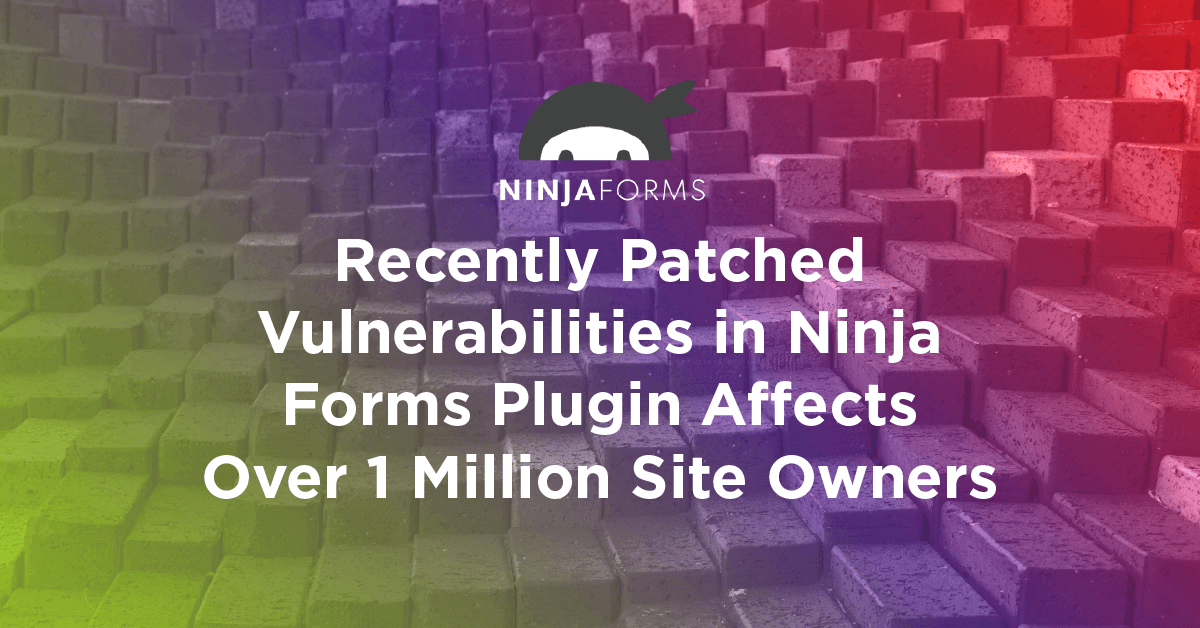 On August 3, 2021 the Wordfence Threat Intelligence team initiated the responsible disclosure process for two vulnerabilities that were discovered in Ninja Forms, a WordPress plugin installed on over 1,000,000 sites. These flaws made it possible for an attacker to export sensitive information and send arbitrary emails from a vulnerable site that could be used to phish unsuspecting users.

We sent the full disclosure details to Ninja Forms on August 3, 2021, as per the security disclosure policy listed on Ninja Forms website. Ninja Forms quickly acknowledged the report the same day and informed us that they would start working on a patch immediately. A patch was released on September 7, 2021 in version 3.5.8.

We strongly recommend updating immediately to the latest patched version of Ninja Forms to patch these security issues, which is version 3.5.8.2 of Ninja Forms at the time of this publication.

The plugin registered a rest route /ninja-forms-submissions/export which did in fact use a permissions_callback. However, this check did nothing more than validate whether or not a user was logged in through the is_user_logged_in() function. There was no check to verify if a user had the appropriate permissions to execute the function.

This meant that any logged-in user could use the /ninja-forms-submissions/export endpoint and export everything that had ever been submitted to one of the site’s forms. Depending on how a site’s forms were configured this data could contain sensitive personally identifiable information (PII) that would provide an attacker with valuable information to conduct other attacks.

In addition to the previous bulk submission export vulnerability, there was another functionality in the plugin that was insecurely implemented using the same vulnerable permissions_callback validation.

Unfortunately, due to the fact that this functionality used the same permissions_callback check, any authenticated user could trigger an email action using the REST-API endpoint. To make matters worse, the trigger_email_action function executed by the email-action endpoint crafted the email based on values that could be passed in the request. This made it possible for an attacker to craft a completely unique email, which included the body and subject, and then send it from the vulnerable site to any email address.

This vulnerability could easily be used to create a phishing campaign that could trick unsuspecting users into performing unwanted actions by abusing the trust in the domain that was used to send the email. In addition, a more targeted spear phishing attack could be used to fool a site owner into believing that an email was coming from their own site. This could be used to trick an administrator into entering their password on a fake login page, or allow an attacker to take advantage of a second vulnerability requiring social engineering, such as Cross-Site Request Forgery or Cross-Site Scripting, which could be used for site takeover.

August 2, 2021 – Conclusion of the plugin analysis that led to the discovery of two vulnerabilities in the Ninja Forms WordPress plugin. We develop a firewall rule to protect Wordfence customers and release it to Wordfence Premium users.
August 3, 2021 – We send over full disclosure details. The vendor confirms they have received the details and will begin working on a fix.
August 31, 2021 – We follow-up with the vendor to check on the status of the security fixes.
September 1, 2021 – Wordfence free users receive the firewall rule. We receive an update that the security fixes are in place and ready to be released. The vendor informs us that they will follow-up with an estimated release date.
September 6, 2021 – We receive an update that the patched version will be released in a few days.
September 7, 2021 – A newly updated version of the plugin, 3.5.8, is released containing sufficient patches.

In today’s post, we detailed two flaws in Ninja Forms that granted attackers the ability to export sensitive data and send arbitrary emails from any vulnerable site. These flaws have been fully patched in version 3.5.8. We recommend that WordPress users immediately update to the latest version available, which is version 3.5.8.2 at the time of this publication.

If you know a friend or colleague who is using this plugin on their site, we highly recommend forwarding this advisory to them to help keep their sites protected as these are serious vulnerabilities that can lead to sensitive information disclosure.