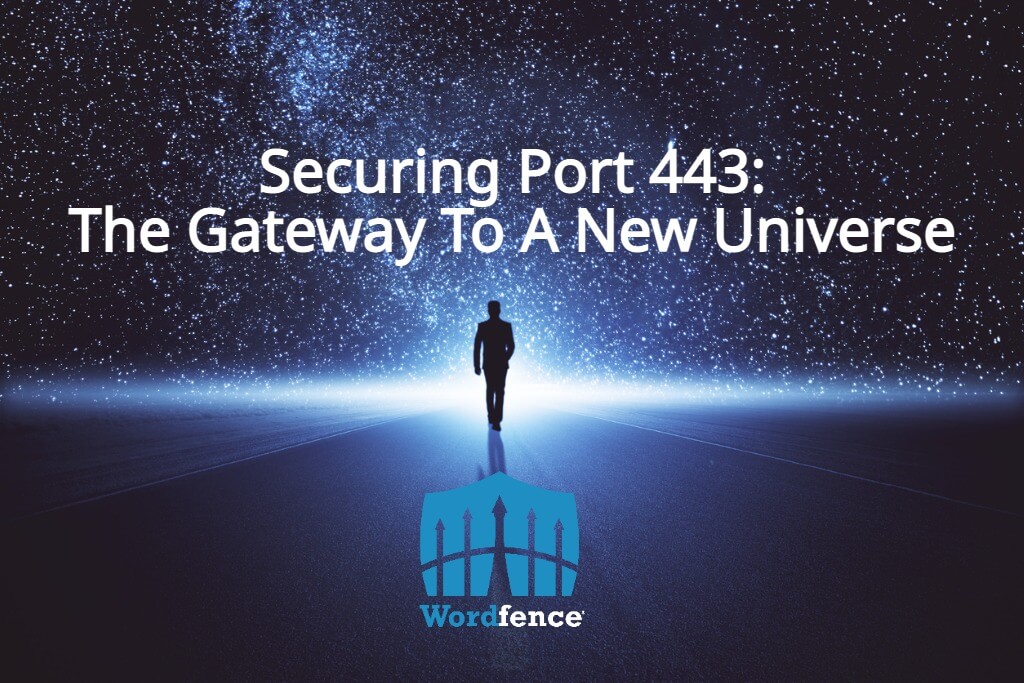 Securing Port 443: The Gateway To A New Universe

At Wordfence our business is to secure over 4 million WordPress websites and keep them secure. My background is in network operations, and then I transitioned into software development because my ops role was at a scale where I found myself writing a lot of code. This led me to founding startups, and ultimately into starting the cybersecurity business that is Wordfence. But I’ve maintained that ops perspective, and when I think about securing a network, I tend to think of ports.

You can find a rather exhaustive list of TCP and UDP ports on Wikipedia, but for the sake of this discussion let’s focus on a few of the most popular ports:

If you run your eye down this list, you’ll notice something interesting. The options available to you for services to run on most of these ports are quite limited. Some of them are specific to a single application, like Redis. Others, like SMTP, provide a limited number of applications, either proprietary or open-source. In both cases, you can change the configuration of the application, but it’s rare to write a custom application on one of those ports. Except port 443.

In the case of port 443 and port 80, you have a limited range of web servers listening on those ports, but users are writing a huge range of bespoke applications on port 443, and have a massive selection of applications that they can host on that port. Everything from WordPress to Drupal to Joomla, and more. There are huge lists of Content Management Systems.

Not only do you have a wide range of off-the-shelf web applications that you can run on port 443 or (if you’re silly) port 80, but you also have a range of languages they might be coded in, or in which you can code your own web application. Keep in mind that the web server, in this case, is much like an SSH or IMAP server in that it is listening on the port and handling connections, but the difference is that it is handing off execution to these languages, their various development frameworks, and ultimately the application that a developer has written to handle the incoming request.

This concept in itself – that the applications listening on the web ports are extremely diverse and either home-made or selected from a large and diverse ecosystem – presents unique security challenges. In the case of, say, Redis, you might worry about running a secure version of Redis and making sure it is not misconfigured. In the case of a web server, you may have 50 application instances written in two languages from five different vendors all on the same port, which all need to be correctly configured, have their patch levels maintained, and be written using secure coding practices.

As if that doesn’t make the web ports challenging enough, they are also, for the most part, public. Putting aside internal websites for the moment, perhaps the majority of websites derive their value from making services available to users on the Internet by being public-facing. If you consider the list of ports I have above, or in the Wikipedia article I linked to, many of those ports are only open on internal networks or have access to them controlled if they are external. Web ports for public websites, by their very nature, must be publicly accessible for them to be useful. There are certain public services like SMTP or DNS, but as I mentioned above, the server that is listening on the port is the server handling the request in these cases.

A further challenge when securing websites is that often the monetary and data assets available to an attacker when compromising a website are greater than the assets they may gain compromising a corporate network. You see this with high volume e-commerce websites where a small business is processing a large number of web-based e-commerce transactions below $100. If the attacker compromises their corporate network via leaked AWS credentials, they may gain access to the company bank account and company intellectual property, encrypt the company’s data using ransomware, or perhaps even obtain customer PII. But by compromising the e-commerce website, they can gain access to credit card numbers in-flight, which are far more tradeable, and where the sum of available credit among all cards is greater than all the assets of the small business, including the amount of ransom that business might be able to pay.

Let’s not discount breaches like the 2017 Equifax breach that compromised 163 million American, British and Canadian citizen’s records. That was extremely valuable to the attackers. But targets like this are rare, and the Web presents a target-rich environment. Which is the third point I’d like to make in this post. While an organization may run a handful of services on other ports, many companies – with hosting providers in particular – run a large number of web applications. And an individual or company is far more likely to have a service running on a web port than any other port. Many of us have websites, but how many of us run our own DNS, SMTP, Redis, or another service listening on a port other than 80 or 443? Most of us who run websites also run MySQL on port 3306, but that port should not be publicly accessible if configured correctly.

That port 443 security is different has become clear to us at Wordfence over the years as we have tracked and cataloged a huge number of malware variants, web vulnerabilities, and a wide range of tactics, techniques, and procedures (TTP) that attackers targeting web applications use. Most of these have no relationship with the web server listening on port 443, and nearly all of them have a close relationship with the web application that the web server hands off control to once communication is established.

My hope with this post has been to catalyze a different way of thinking about port 443 and that other insecure port (80) we all hopefully don’t use. Port 443 is not just another service. It is, in fact, the gateway to a whole new universe of programming languages, dev frameworks, and web applications.

In the majority of cases, the gateway to that new universe is publicly accessible.

Once an attacker passes through that gateway, a useful way to think about the web applications hosted on the server is that each application is its own service that needs to have its patch level maintained, needs to be configured correctly, and should be removed if it is not in use to reduce the available attack surface.

Think of port 443 as a gateway to a new universe that has no access control, with HTTPS providing easy standardized access, and with a wide range of diverse services running on the other side, that provide an attacker with a target and asset-rich environment.

Footnote: We will be exhibiting at Black Hat in Las Vegas this year at booth 2514 between the main entrance and Innovation City. Our entire team of over 30 people will be there. We’ll have awesome swag, as always. Come and say hi! Our team will also be attending DEF CON immediately after Black Hat.

Written by Mark Maunder – Founder and CEO of Wordfence.