The Defiant Threat Intelligence team recently began tracking the behavior of an organized brute force attack campaign against WordPress sites. This campaign has created a botnet of infected WordPress websites to perform its attacks, which attempt XML-RPC authentication to other WordPress sites in order to access privileged accounts.

Between Wordfence’s brute force protection and the premium real-time IP blacklist, we have blocked more than five million malicious authentication attempts associated with this attack campaign in the last thirty days alone.

The threat actors (hackers) use a group of four command and control (C2) servers to send requests to over 14,000 proxy servers provided by a Russian proxy provider called best-proxies[.]ru. They use these proxies to anonymize the C2 traffic. The requests pass through the proxy servers and are sent to over 20,000 infected WordPress sites. Those sites are running an attack script which attacks targeted WordPress sites. The diagram below illustrates the attack chain. 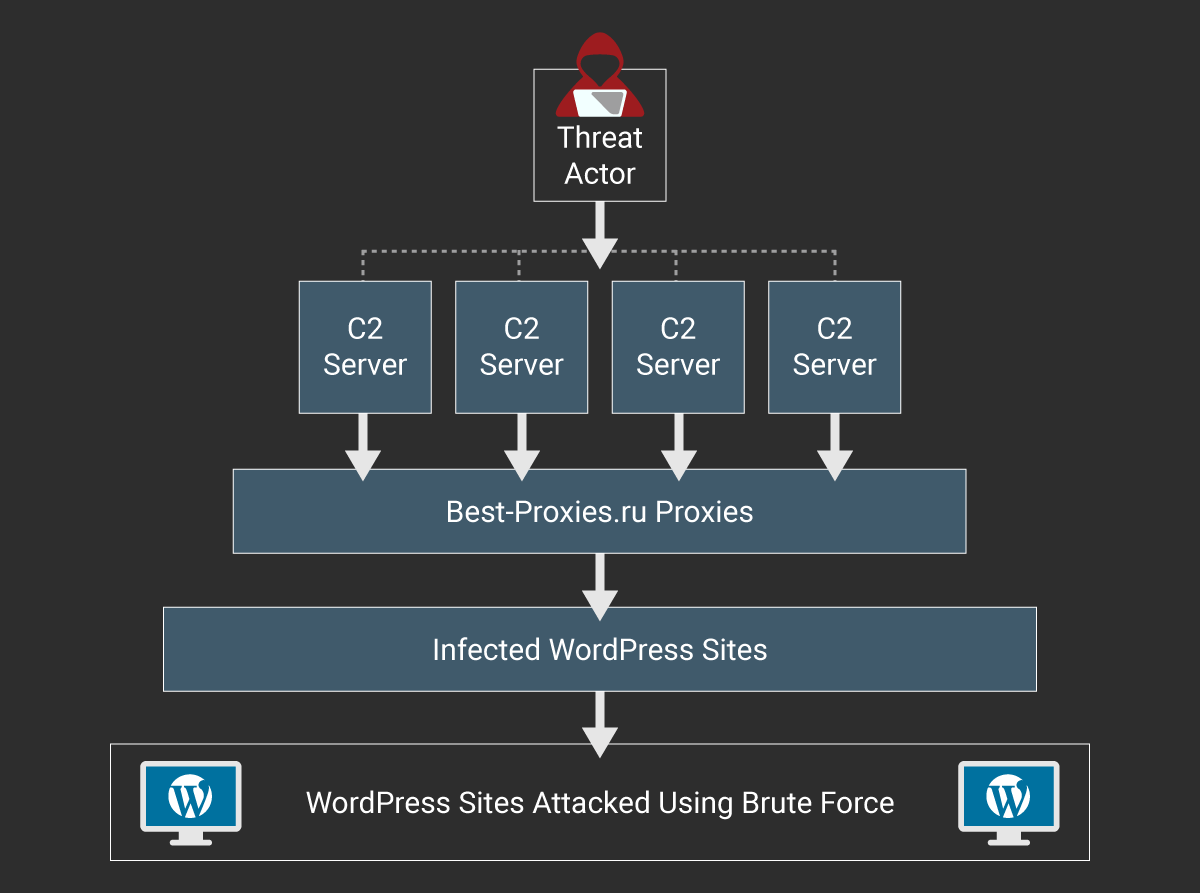 In the post below, we describe this attack chain in detail for the benefit of researchers, vendors and security operations teams. We have omitted or redacted data in some cases because the C2 servers and infected WordPress sites are still online and may be exploited by others. Our team is sharing data with law enforcement related to this investigation. We are also providing data to affected hosts to help them remediate infected machines on their networks.

In our research of this campaign we determined that the IPs performing the brute force attacks were nearly all associated with popular web hosting providers, and that the attacks were all targeting WordPress’s XML-RPC interface at /xmlrpc.php. We also noted that the User-Agent strings associated with these requests matched those used by applications commonly seen interacting with the XML-RPC interface, like wp-iphone and wp-android. Since these applications typically store credentials locally, it was unusual to see a significant amount of failed logins from them, which drew our attention. We identified over 20,000 WordPress slave sites that were attacking other WordPress sites.

With this data in hand, we went on to identify brute force attack scripts present on infected WordPress sites matching the attacks we were tracking. The scripts target the XML-RPC interface of WordPress sites to test username/password pairs, and randomly spoof the User-Agent string of each request:

The brute force script takes command and control (C2) input via POST in order to define some execution settings, such as a JSON array of targeted domains and a local wordlist to be used:

The wordlists associated with this campaign contain small sets of very common passwords. However, the script includes functionality to dynamically generate appropriate passwords based on common patterns. A few examples of these patterns are:

In other words, if the brute force script was attempting to log on to example.com as the user alice, it will generate passwords like example, alice1, alice2018, and so on. While this tactic is unlikely to succeed on any one given site, it can be very effective when used at scale across a large number of targets.

WordPress’s XML-RPC interface saw an upswing in brute force attacks in 2015, when attacks leveraging multicall functionality became popular. In short, using this interface an attacker could send a large number of user/password pairs in a single request. WordPress would test each pair, and return a list of successes and failures. This technique made the brute force attack process much easier to launch at scale, since an attacking device would only need to send a single batch of credentials and wait for a reply.

The brute force script in this campaign is built to perform this type of multicall attack by default. The code snippet below shows the function that, when given a username and array of passwords, will assemble a single XML object containing all of the passwords to be attempted.

The C2 systems issuing instructions to the brute force script can optionally define $startPass and $endPass variables, which tell the script to only attempt a subset of passwords on a given list instead of running the entire set.

Many WordPress users may not be aware that this XML multicall attack is no longer effective. A patch to wp-includes/class-wp-xmlrpc-server.php was introduced in WordPress 4.4. With this patch, if one login attempt in an XML-RPC request fails on a targeted website, that website will immediately fail all subsequent attempts in the same request, even if the credentials are valid.

The XML-RPC patch to WordPress 4.4 was released quietly, and isn’t disclosed in the release notes. It also hasn’t been backported to earlier WordPress branches like the majority of security fixes, despite being a relatively uninvasive patch. To clarify, even if a site is on the latest security release of a WordPress branch from 4.3 and older, it can be vulnerable to this attack method.

The attackers in this campaign seem to be aware of this improvement. A number of requests from C2 systems to (formerly) infected sites have been intercepted by the Wordfence firewall, and these requests all define the same value for the $startPass and $endPass parameters described above. This means that the attack scripts end up attempting authentication with one user/password combination at a time, effectively deprecating the script’s own multicall functionality.

As mentioned above, we’ve been able to capture requests sent from C2 systems to the network of infected WordPress sites, and have been successful in acquiring a great deal of intelligence from this data.

The attack chain in this campaign made use of multiple layers of abstraction between the attacker and target sites. Brute force attacks are executed by a network of infected WordPress sites, which receive instructions via a network of proxy servers, so it would typically be very difficult to track the central C2 servers behind it all. We were fortunate, though, that the attacker made some mistakes in their implementation of the brute force scripts.

Since the scripts each make use of wordlists stored on the same infected WordPress site, they include functionality to regenerate these wordlists if necessary:

The checkWordsList() function is passed a $path argument which defines a remote address containing the wordlist to be used. If the local wordlist is missing, the script will download the list from the given address. This path is provided alongside the rest of the POST data sent from the proxy servers to the brute force script. Requests intercepted by our firewall included this path, which contained an IP address.

This IP pointed to a server which contained a login page, which suggested we found something big.

We went on to identify a total of four active command and control servers involved in the brute force campaign.

Brief analysis of the C2 sites revealed that, despite the login page, authentication to these systems wasn’t actually enforced. Attempting to access pages on the C2 interface would trigger a 302 redirect to the login page, but the application still sent the page data alongside the redirect.

cURL request to the homepage of a C2 server. Note the 302 redirect to /login.php, as well as the HTML response that follows it.

Using BurpSuite, we created a proxy rule that ignores this login redirect, which gave us the ability to browse the interface of the C2 application freely. Contained within the interface was a number of features, including the ability to access a list of “slaves”, which referred to the infected WordPress sites containing brute force scripts.

One view available in the C2 interface showing a list of logs exported by the attacker.

With access to the interfaces of these C2 servers, we were able to identify the relationship between these servers and the proxy servers issuing commands to the “slave” sites. Each server contained a file in its webroot named proxy.txt. This file contains a list of nearly ten thousand SOCKS proxy addresses, with IP addresses and ports. These IP addresses coincided with the proxy servers we had previously identified, suggesting the C2 uses this file to randomly select a proxy when issuing each attack. We identified 14,807 proxy servers.

Interestingly, the proxy.txtfile on one of the C2 servers didn’t contain a list of proxy addresses, but instead contained an HTML document. The document was a copy of a 503 Service Unavailable error, including a link to api.best-proxies.ru. Also in this document was Russian text which translates to “Authorization error: The validity period of this key is over, you can buy a new key.”

It turns out, even hackers forget to pay their bills. 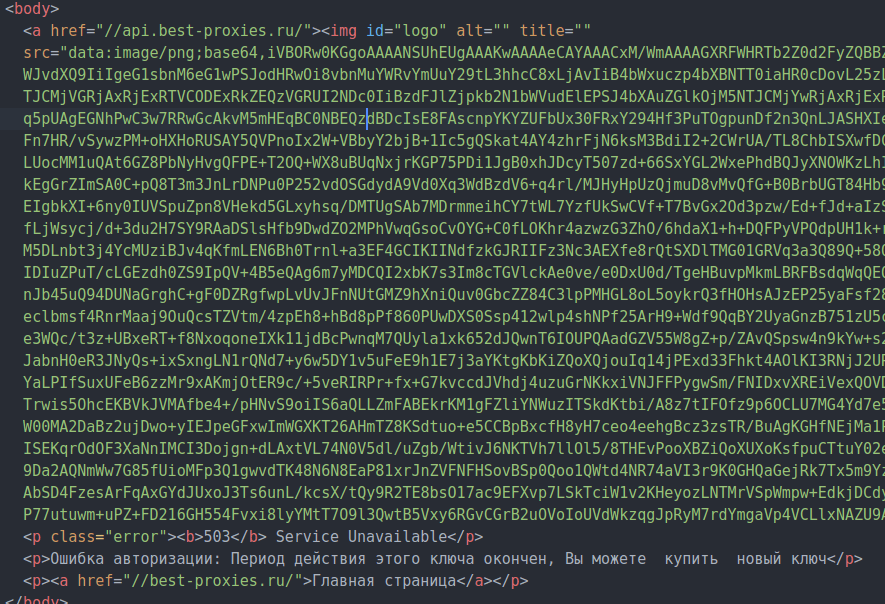 Screenshot of the error document stored on a C2 server, suggesting the attacker failed to renew the API key used to access proxy lists.

Given the circumstances, it’s probable that the C2 server sources its list of SOCKS proxies from api.best-proxies.ru by directly storing the API response in proxy.txt. When the API returns an error, this error overwrites the proxy list.

C2 Servers and “Bulletproof” Hosts in Romania, Netherlands and Russia

The C2 servers we identified are hosted with providers known in the security community as “bulletproof” hosts. “Bulletproof” refers to hosts that are known for lax (if any) enforcement of abuse policies and legal action, making them a de facto safe haven for malicious activity.

According to MaxMind’s GeoLite2 ASN database, three of the identified C2 servers are associated with a company called HostSailor. HostSailor has been in the news for infamously threatening KrebsOnSecurity after the security publication drew attention to the company’s questionable practices.

Two of the C2 servers hosted at HostSailor are located in the Netherlands and one is in Romania. The remaining C2 server is hosted with SELECTEL, a Russian hosting provider which is referred to as bulletproof in discussions on forums like BlackHatWorld.

A great deal of valuable data was gathered as a part of this investigation. Due to the nature of our work, our team maintains contact with a number of law enforcement agencies around the globe. While we typically share a great deal of data on these blog posts, like IP addresses and other indicators of compromise, in this case we have elected to retain some of this information in order to prevent interfering with possible future investigations.

In addition to law enforcement, we will be contacting some hosting providers we’ve identified with large numbers of infected “slave” sites. It is our hope that providing this information can help limit the effectiveness of this campaign by reducing the number of active sites launching attacks.

What Should Site Owners Do?

In order to prevent your site from falling victim to brute force attacks, it is valuable to implement restrictions and lockouts for failed logins. The Wordfence plugin features robust brute force protection, and the IPs launching the attacks are automatically blocked for Premium Wordfence users with access to the real-time IP blacklist.

The Wordfence scanner is effective at detecting the malware this attack campaign is dropping on affected websites. That detection capability is already in production for Premium customers and will be available for our community users in a few days.

If you believe your site is infected and launching attacks as part of this campaign, please consider making use of our site cleaning services. Our team is familiar with these cases and can ensure your issue is properly handled. You should also consider having our team perform a site security audit.

The Defiant Threat Intelligence Team identified a widespread campaign of brute force attacks against WordPress websites. These attacks were launched by malicious scripts planted on other WordPress sites, which received instructions from a botnet with a sophisticated attack chain, using a Russian based proxy provider. We are actively collaborating with law enforcement and hosting providers to mitigate the effects of this attack campaign and the threat actor involved.

Breaking WordPress Security Research in your inbox as it happens.