This week we are introducing something new. At the beginning of each month we will be doing a monthly WordPress security report. We will look at the attack data for the previous month from the 1st to the end of the month and provide a report and analysis on the attack activity we have seen on WordPress websites.

This is the monthly WordPress attack report from December 1st, 2016 until December 31st, 2016.

In the table below we have listed the most active attack IPs for December 2016. Note that the ‘Attacks’ column is in millions and is the total of all attacks that originated from each IP. Further right in the table (you may have to scroll) we break out the attacks into ‘brute force’ attacks and ‘complex’ attacks.

The hostname included is the PTR record (reverse DNS record) that the IP address owner created for their IP, so this is not reliable data but we include it for interest. For example, we have seen PTR records that claim the IP is a Tor exit node, but it is clearly not based on traffic.

We also include the country and a country flag. To the far right of the report we show the date in December we started logging attacks and the date attacks stopped. For many of these IPs we logged attacks for the entire month. For some you can see there is a clearly defined attack ‘window’ where the IP started and stopped.

The data below is embedded using a service called Airtable. This is the first time we’re trying Airtable, so please leave your feedback in the comments. You’ll note that it is also exportable.

As you can tell from the table above, the Ukraine absolutely dominates the report. We have a total of 13 out of 25 top IPs that are based in Ukraine. Attacks are originating from 4 Ukrainian netblock owners:

Surprisingly, France takes the number 2 spot for the most IPs in the top 25 list with a total of 7 attack IPs. Most of these originate from Iliad Enterprises. Iliad is a large organization with many subsidiaries and over 4000 employees. They tried to buy T-Mobile in the USA 2 years ago. The netblock for these IPs is registered to Iliad, but the attacks may originate from one of many subsidiaries of Iliad, like the ISP ‘Free’ in France.

The outlier on the map is an IP address “89.248.172.121” based in Seychelles, which is an island off the east coast of Africa. Seychelles has a population of just over 90,000 and is officially the smallest sovereign African nation.

We logged 2.2 million complex attacks originating in Seychelles. This is surprising because internet access to islands is generally expensive and slow. But Seychelles is doing their part to contribute to global attacks on WordPress publishers.

We tracked the attacks to what appears to be an audio-visual store in downtown Victoria in Seychelles, based on public whois information for this IP. The IP is not a known Tor exit node and it probably is not a VPN exit node because it is unlikely that Seychelles has their own VPN provider.

Based on usage patterns we are seeing available in public data (try a Google search), the IP appears to be the public IP for users of a local Seychelles ISP. The attacks are probably an individual based in Victoria, Seychelles, who is using the ISP.

However, if you look at the total attacks we saw for the top 25 IP addresses, we saw 63 million complex attacks and 67 million brute force attacks. The most active IPs are choosing to launch complex attacks that are blocked by the Wordfence firewall, but the most common attack type is brute force, or password guessing.

This makes sense because more sophisticated attackers will launch a high volume of attacks that will have a high success rate. They will therefore choose to launch complex attacks and a huge number of them. Less sophisticated attackers will launch brute force attacks but won’t be able to deliver the same attack volume as the pros. So you should see a lot of lower volume IPs engaging in brute force attacks and a few high volume IPs engaging in complex attacks, and that’s exactly what we are seeing.

In the top 25 list, not a single IP is a Tor exit node. Tor exit nodes are probably used by several low volume attackers for a wide variety of attacks. Using Tor is anonymous, but slow. Tor introduces a lot of latency (delay) in web requests. When you decide to bulk hack millions of WordPress websites, you probably don’t want the latency that comes with using Tor. You can learn more about Tor in our Learning Center.

Now that we have the full data for December, you can see that this culminated in a huge increase in total attacks at the end of the month.

In late December we saw a massive spike in brute force attacks. The average for the month was 20 million attacks per day, and the total attacks we blocked spiked to over 45 million for a period of 48 hours. 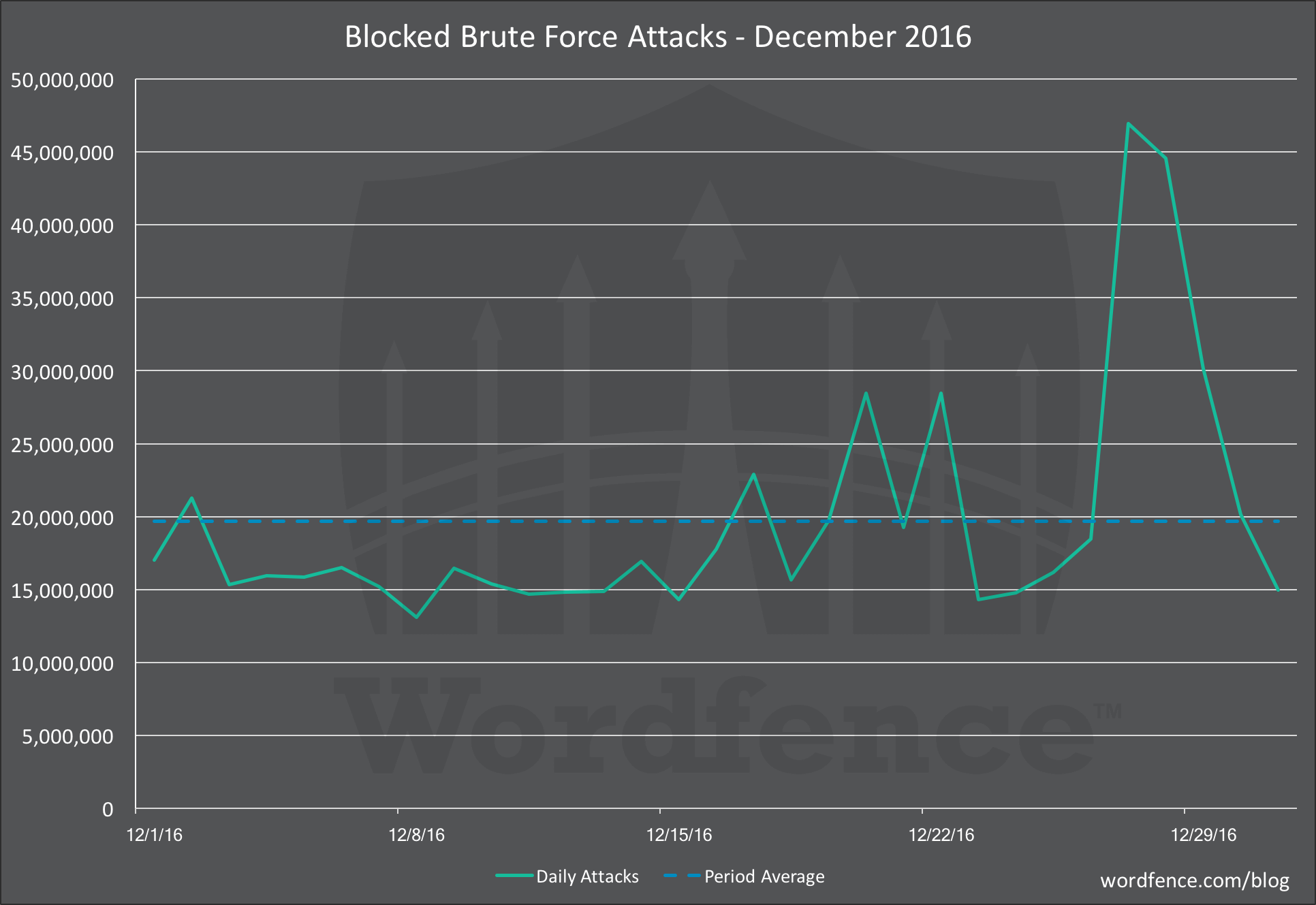 As you can tell from our top 25 data, no single IP generated more than 6.3 million brute force attacks for the entire period. To add an additional 25 million attacks per day, over and above what we normally see, an attacker would have to compromise a large number of IP addresses and then launch attacks distributed across their new attack platform. The data from our mid-month report showed that large spike in new attack IPs.

The attack quickly died down and this may have been due to the noise the attacking IPs were generating. It would have been easy for hosting providers to detect outgoing malicious activity on their networks and shut down the servers that were launching these attacks.

Early this month we have seen brief spikes of similar activity that have lasted a few hours. We have not yet seen a multi-day effort like we saw in late December.

From December 15th to December 27th we saw a marked increase in complex attacks that were blocked by the Wordfence firewall. Attack volume did not quite double, as we saw in the brute force chart above.

The peak attack volume for complex attacks blocked by Wordfence was just over 8 million attacks per day. There is no strong correlation in the timing of complex attacks and brute force attacks or the duration. They appear to be disconnected. 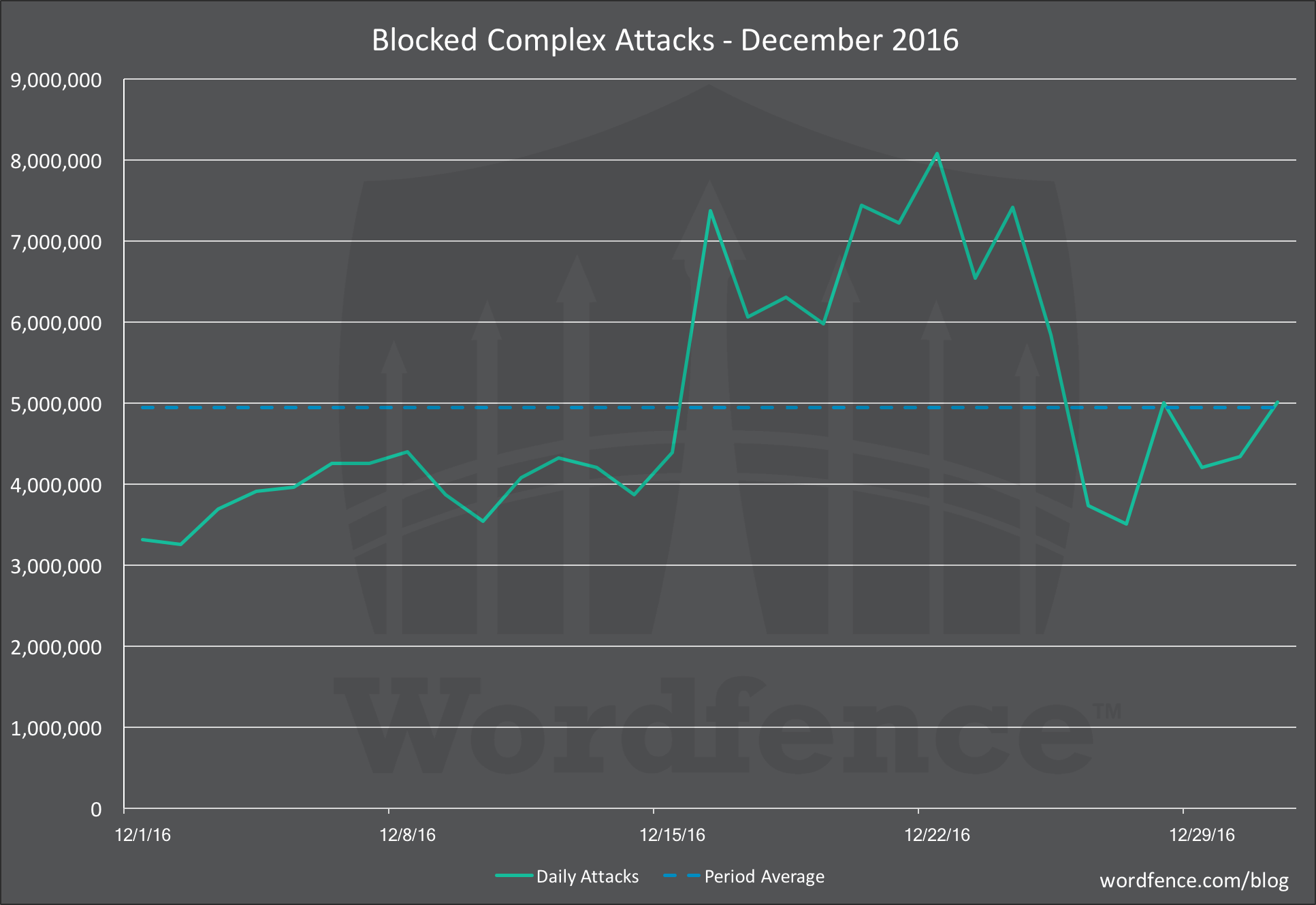 Plugins seeing the most attacks

The table below shows which plugins were most targeted by attacks in December 2016. You should note that all of these are publicly known vulnerabilities that the plugin vendor is probably aware of and has fixed, although we have not verified this.

The list below is simply a list of what we are seeing attacked in the wild. It is not a list of “most vulnerable” plugins or a list of plugins that are currently vulnerable.

The “Plugin Slug” is the unique ‘slug’ used to identify the plugin to WordPress. It is easier for us to extract plugins by ‘slug’ from our attack data than get actual plugin names.

You’ll notice that many of these are old vulnerabilities. Some of them date as far back as 2012. The reason we think these old vulnerabilities are being so widely exploited is because most attacks use free, off-the-shelf WordPress scan and exploit tools.

These tools come pre-loaded with a number of exploits that an inexperienced attacker can automatically launch at any WordPress website. This makes up the bulk of the attacks on WordPress plugins that we see. They have a low likelihood of success if you are keeping your WordPress installation up-to-date.

Themes seeing the most attacks

The list below shows the slugs of themes that we saw most commonly targeted in December 2016. Once again, this is not a list of vulnerable themes or the ‘most unsafe’ themes. They are simply commonly targeted and most likely had vulnerabilities at some point that have now been fixed.

We’ve included the year each vulnerability that is being exploited was published and most of the slugs in the table have links to the exploit that is most likely being used.

As with the plugins, this list contains many old exploits, probably for the same reason. Most of the vulnerabilities in this list are “local file inclusion” vulnerabilities that allow an attacker to download wp-config.php or other sensitive files.

That concludes our monthly attack report for December 2016. You are welcome to download the top 25 list of IP addresses and perform your own analysis. The Airtable embed includes an option for a CSV download.