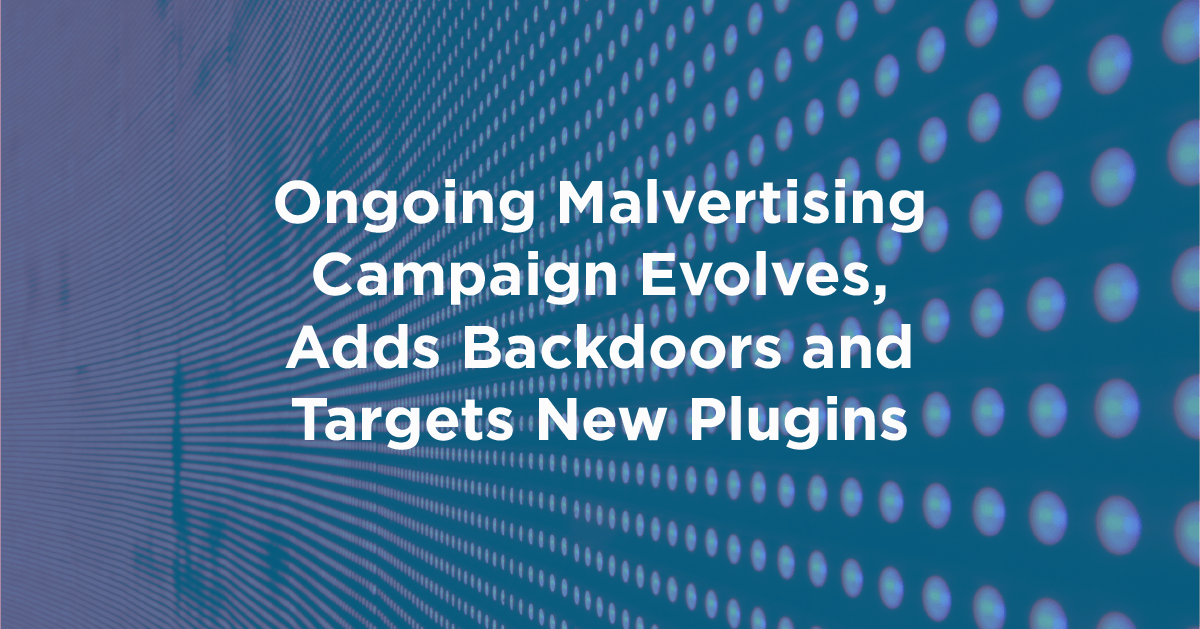 In July, we reported on a malvertising campaign which was distributing redirect and popup code through a number of public vulnerabilities affecting the WordPress ecosystem. As mentioned in the article, we’ve continued tracking this threat for new or changing activity.

Much of the campaign remains identical. Known vulnerabilities in WordPress plugins are exploited to inject malicious JavaScript into the frontends of victim sites, which causes the sites’ visitors to be redirected to potentially harmful content like malware droppers and fraud sites. Where possible, the payloads are obfuscated in an attempt to avoid detection by WAF and IDS software.

However, some new indicators of compromise (IOCs) have been linked to this campaign since our last report. In today’s post, we’ll share some of this updated activity.

One IP Address Is Issuing Most of the Attacks

During the initial investigation, we identified the attacks coming from a number of IP addresses linked to web hosting providers. Shortly after that post, most of the IPs involved ceased the activity. One IP address, however, has continued the attacks.

The IP address in question is 104.130.139.134, a Rackspace server currently hosting some presumably compromised websites. We have reached out to Rackspace to inform them of this activity, in hopes that they will take action in preventing further attacks from their network. We have not yet heard back.

This campaign has been targeting a number of known vulnerabilities since we began tracking it, and new vulnerabilities are added to the list of targets as they’re discovered. Of particular note is a recently disclosed flaw in the Bold Page Builder plugin. On August 23rd, NinTechNet released a warning that a vulnerability had been discovered in the plugin and had been under attack since the previous day. The Wordfence firewall’s built-in XSS protection detected attacks against this vulnerability as early as August 20th.

The plugins currently under attack in this campaign are:

The campaign picks up new targets over time. It’s reasonable to assume any unauthenticated XSS or options update vulnerabilities disclosed in the near future will be quickly targeted by this threat actor.

Our initial research into this campaign identified the injection of scripts which triggered malicious redirects or unwanted popups in the browsers of a victim site’s visitors. Since that time, the campaign has added an additional script which attempts to install a backdoor into the target site by exploiting an administrator’s session.

The following code is an example of the raw payload used to accomplish this:

This obfuscated payload, when decoded, shows the following:

This short JavaScript block generates a new <script> tag on affected pages, sets its src parameter to https://yourservice.live/include.js, then executes it.

The code contained in include.js is responsible for attempting to create a new user with administrator privileges on the victim’s site. After checking for a cookie to determine if the given visitor has triggered the payload before, a function called checkmeone() is executed in order to test if that visitor is capable of creating new users, which would be the case if a logged-in administrator views an affected page. The deobfuscated content of that function is as follows:

If the user is presented with a _wpnonce_create-user nonce when visiting the site’s wp-admin/user-new.php endpoint, then the script knows a new user can be created. If this is the case, the putmeone() function is triggered. This function makes an AJAX call via jQuery which creates the rogue administrator account.

This AJAX call creates a user named wpservices with the email wpservices@yandex.com and the password w0rdpr3ss. With this user in place, the attacker is free to install further backdoors or perform other malicious activity.

At the time of this writing, attacks associated with this campaign are still ongoing. Wordfence users, even if still using the free version, are protected from the XSS attacks seen in this campaign by our firewall rules. We are continuing to track exploitation of new vulnerabilities, which may provide us with more unique payloads requiring new firewall rules. We will issue updates as appropriate.

As always, updating the plugins and themes on your WordPress site is an excellent layer of defense against campaigns like these. Check your site for needed updates frequently to ensure you’re receiving the latest patches as they’re released. Wordfence users periodically receive emails informing them when updates are available as well.

Please consider sharing this post with your peers to spread awareness of this malicious activity. Additionally, if you believe your site has fallen victim to these or any other attacks, our site cleaning team is here to help. Thank you for reading.