In the table below we have listed the most active attack IPs for January 2017. Note that the ‘Attacks’ column is in millions and is the total of all attacks that originated from each IP. Further right in the table (you may have to scroll right) we break out the attacks into ‘brute force’ attacks and ‘complex’ attacks.

The hostname included is the PTR record (reverse DNS record) that the IP address owner created for their IP, so this is not reliable data but we include it for interest. For example, we have seen PTR records that claim the IP is a Tor exit node, but it is clearly not based on traffic.

We also include the country and a country flag. To the far right of the report we show the date in January we started logging attacks and the date attacks stopped. For many of these IPs we logged attacks for the entire month. For some you can see there is a clearly defined attack ‘window’ where the IP started and stopped.

The first interesting thing about our January attack data is that the same Ukraine IP holds the number one spot this January as we saw in December. Our top 3 attacking IPs all appeared in last month’s list.

The Seychelles attacker we saw last month has dropped off the list. In addition, we have Turkey appearing on the list for the first time with three IP addresses hosted at “Yalcin Kanbur trading as Webrano Hosting”, generating over 6 million attacks during January between them.

India has also appeared on the list for the first time with an IP hosted at “Reliance Communications” generating around 2 million attacks during January.

A Change in Complex Attacks vs Brute Force

Last month we saw 66.7 million brute force attacks and 63.9 million complex attacks from our top 25 attacking IPs. You’ll recall that a complex attack is one that targets a plugin, theme or core vulnerability and is blocked by the Wordfence firewall.

This month we’re seeing 64.1 million brute force attacks from our top 25 attacking IPs. However, this time around we’re only seeing 34.5 million complex attacks.

This change indicates that the most prolific attackers have changed their strategy and are focusing more on brute force WordPress attacks than on trying to exploit vulnerabilities in WordPress core, themes and plugins. 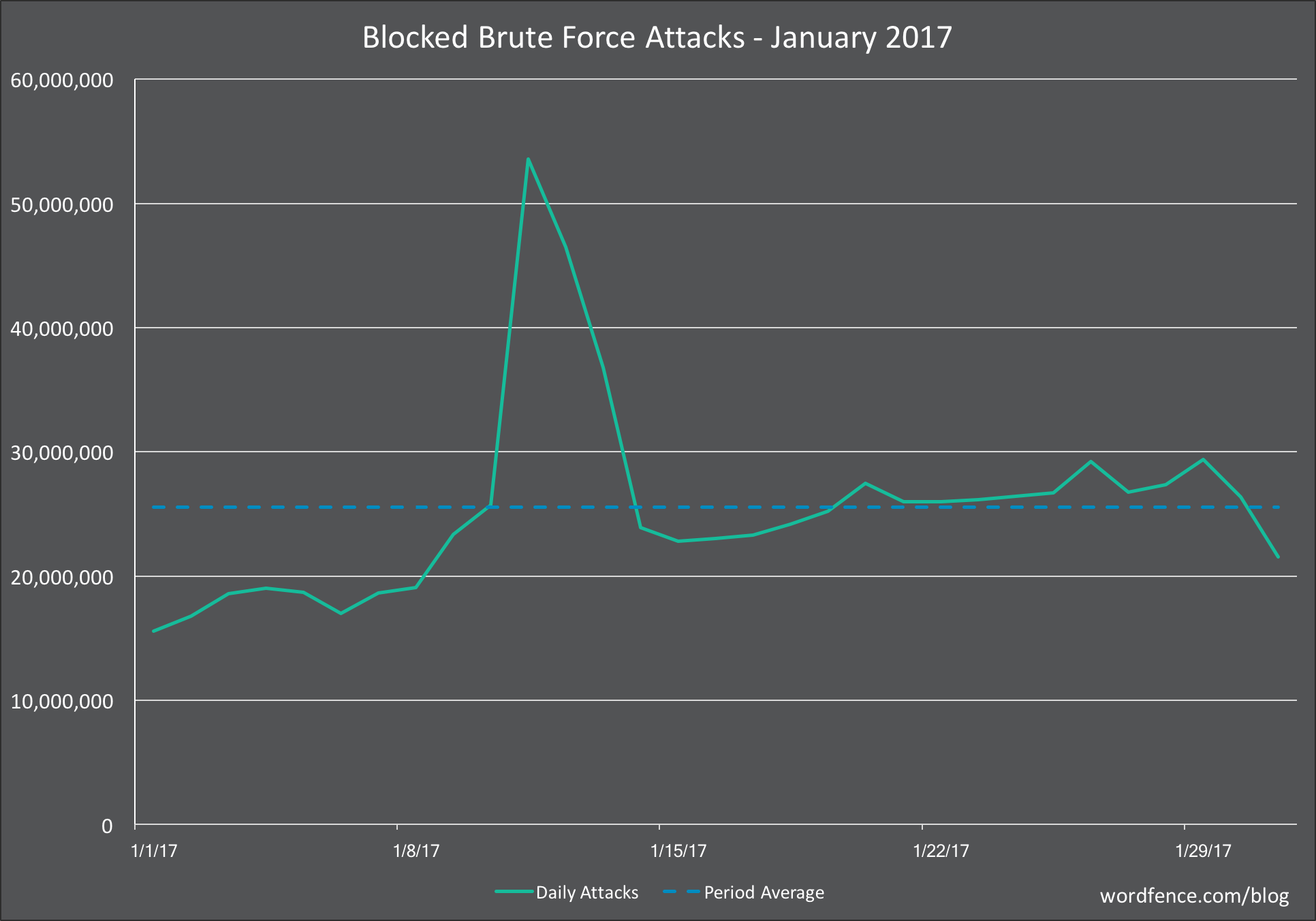 The chart above shows the brute force activity on WordPress sites that we saw in January. You’ll notice a huge spike in activity just before the middle of the month. This really gives you an idea of the kind of volatility that can occur.

We will occasionally see situations like this where an attacker will gain access to servers that they can use as an attack platform. They will generate a huge amount of activity until their IPs are shut down by the hosting provider or network admin.

Complex Attacks on WordPress in January 2017 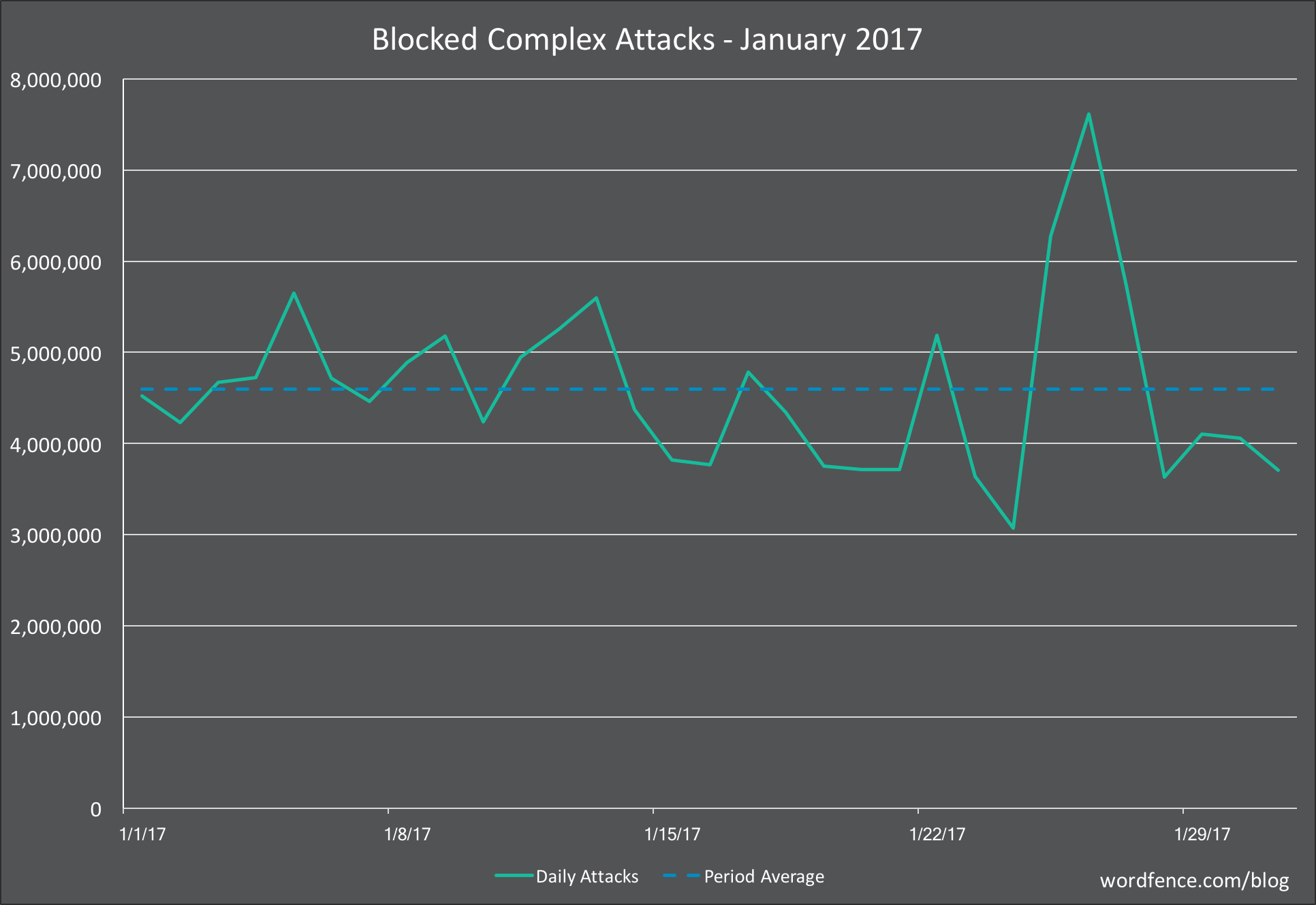 This decrease in the number of attacks is due to only a single large spike in attack traffic in January compared to a sustained spike in December that lasted more than 1 week.

However the number of attacks in January during the low periods was significantly higher than in December with 3.5 million in December compared to 4 million at the lowest activity in January.

The table above shows the top 25 plugins that experienced the most attacks during January 2017. The table shows the rank in January, and then the change in ranking compared to December. If you scroll to the far right you can see the number of attacks per plugin during the period.

The WP-Mobile-Detector plugin saw the biggest gain in the number of attacks, jumping 25 points in our rankings to position 12. The plugin has been removed from the WordPress plugin repository, probably because a vulnerability was not fixed by the author, and the last review was posted over 7 months ago.

The plugin continues to see attacks, which may indicate that some WordPress sites still have this installed and are still vulnerable. It may also simply be because attack toolkits that attempt to exploit multiple vulnerabilities incorporate this exploit and then throw a series of exploits at websites in the hope that one of them works.

Let me know in the comments if you have any additional data you’d like to contribute that may indicate reasons for plugin gains or losses in number of attacks, or any other insight you’d like to share.

The table above shows attacks we saw on themes in January and we’ve included the change in ranking since December. The rankings for these themes are incredibly stable. The largest change we saw is “linenity” which has a local file inclusion or LFI vulnerability that became public knowledge back in April 2014. The vulnerability allows an attacker to download the wp-config.php file.

In this report for the first time, we are including data on the number of attacks originating in each country. Because this is a new addition to our monthly attack activity report, we won’t have ranking change data for this month.

The number of attacks below are the sum of brute force and complex attacks that originate in each country. It’s important to note that this does not indicate that a specific country’s government is launching attacks. Instead this is a general indication of the state of security in each country.

There are a few factors that may cause an increase in attacks from a particular country:

That concludes our first Wordfence Attack Activity Report of 2017. As always we welcome you to download the data in the tables above to perform your own analysis and share it here in the comments.

Please post any questions or feedback in the comments and as always I will be around to try to answer them.

Special thanks to Dan Moen and other Wordfence team members who produced this report and who also tirelessly manage the code and infrastructure that enables us to provide this insight to the community.