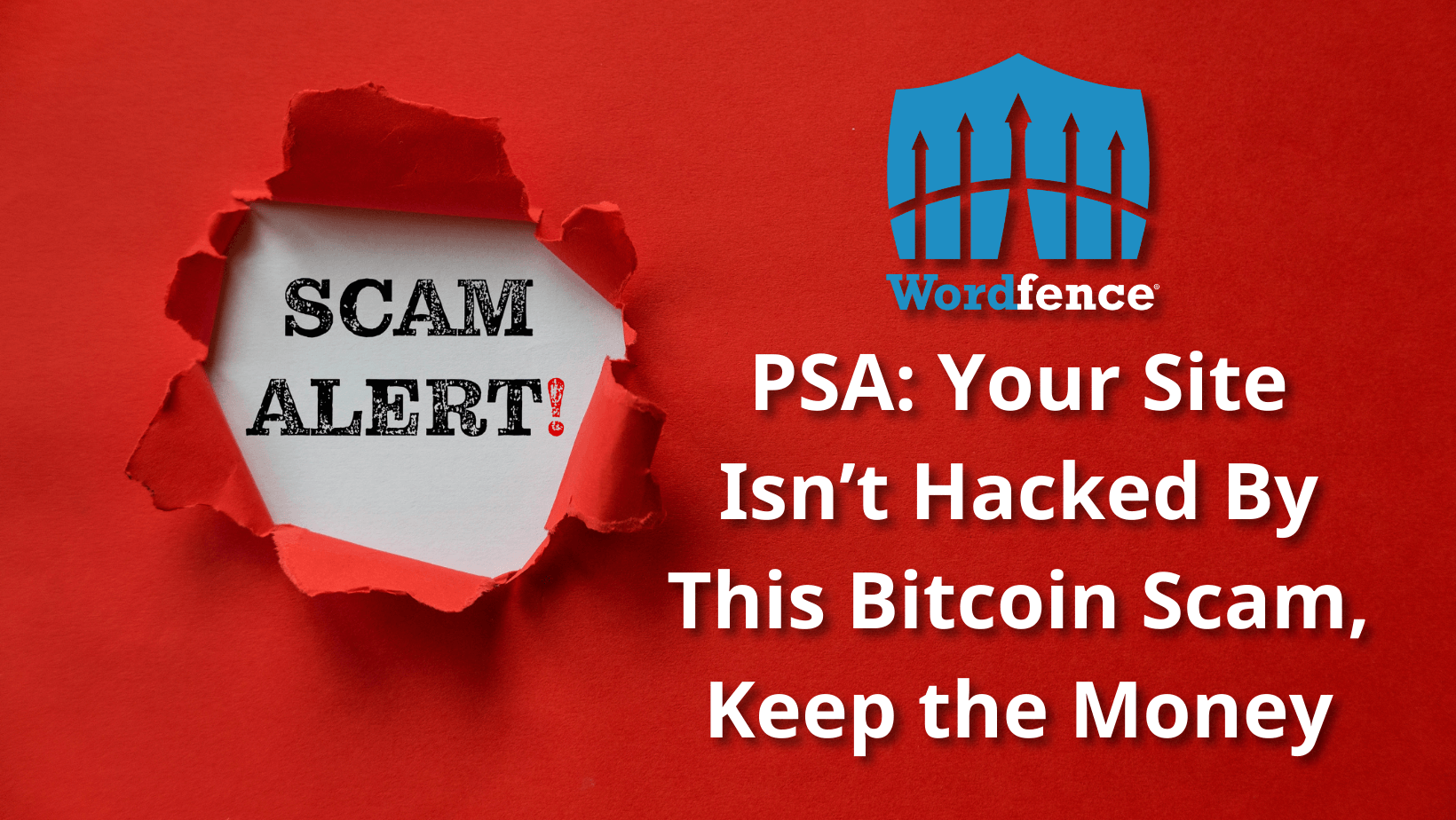 PSA: Your Site Isn’t Hacked By This Bitcoin Scam, Keep the Money

On January 19th, 2023, a member of the Wordfence Threat Intelligence team received an email from their personal blog, claiming the site had been hacked, and we received two reports from Wordfence users who received the same message. The email claimed that the site had been hacked due to a vulnerability on the site. The email went on to demand about $3,000 worth of Bitcoin to prevent the malicious actor from damaging the site’s reputation. This is of course only a scare tactic, and not a true cause for concern. The site was not actually hacked.

This campaign appears to have begun on or around January 18, 2023, and while our data on it is light, the campaign is ongoing. The messages are being sent by a threat actor or a bot they control to submit the message through a contact form on a website. As we do not have data on emails submitted directly through a contact form, this attack campaign is likely to be significantly more prolific than the numbers we have available.

The message in question, which can be seen below in its email form, is a scare tactic that is used to trick victims into paying to prevent a leak of sensitive data, damage to the website, or whatever other potential consequences the vague threat may conjure up in the site owner’s mind.

From: Manie Hedin <hacker@sludgepool.org>
Subject: Your Site Has Been Hacked

Message Body:
Your Site Has Been Hacked

PLEASE FORWARD THIS EMAIL TO SOMEONE IN YOUR COMPANY WHO IS ALLOWED TO MAKE IMPORTANT DECISIONS!

We have hacked your website https://<victimsite>.com and extracted your databases.

How did this happen?

What does this mean?

We will systematically go through a series of steps of totally damaging your reputation. First your database will be leaked or sold to the highest bidder which they will use with whatever their intentions are. Next if there are e-mails found they will be e-mailed that their information has been sold or leaked and your https://<victimsite>.com was at fault thusly damaging your reputation and having angry customers/associates with whatever angry customers/associates do. Lastly any links that you have indexed in the search engines will be de-indexed based off of blackhat techniques that we used in the past to de-index our targets.

How do I stop this?

We are willing to refrain from destroying your site’s reputation for a small fee. The current fee is $3000 in bitcoins (0.14 BTC).

So, you have to manually copy + paste Part1 and Part2 in one string made of 42 characters with no space between the parts that start with "b" and end with "n" is the actually address where you should send the money to.

Once you have paid we will automatically get informed that it was your payment. Please note that you have to make payment within 72 hours after receiving this message or the database leak, e-mails dispatched, and de-index of your site WILL start!

How do I get Bitcoins?

You can easily buy bitcoins via several websites or even offline from a Bitcoin-ATM.

What if I don’t pay?

If you decide not to pay, we will start the attack at the indicated date and uphold it until you do, there’s no counter measure to this, you will only end up wasting more money trying to find a solution. We will completely destroy your reputation amongst google and your customers.

This is not a hoax, do not reply to this email, don’t try to reason or negotiate, we will not read any replies. Once you have paid we will stop what we were doing and you will never hear from us again!

Please note that Bitcoin is anonymous and no one will find out that you have complied.

While this extortion campaign may not pose any real danger, it is still important to take website security seriously. WordPress core, themes, and plugins need to be updated with the latest security updates to patch known vulnerabilities. Even with everything updated, there may be vulnerabilities that are not publicly known and do not have an available patch. For this reason, a website security solution that includes a web application firewall (WAF) that can block common exploits, such as Wordfence, should be implemented.

While this extortion campaign is still in its early stages, there are some observables that can be used to identify and block these extortion attempts.

In this post, we discussed an emerging extortion campaign where emails are being sent to site owners through contact forms. This campaign does not pose an actual threat to the website, but serves as a reminder to keep websites updated and implement a website security solution.

Regardless of this being a scam, if you would like additional assurance that your site has not been compromised due to this scam, you can follow our guide to cleaning a hacked site or utilize Wordfence Care or Response to do a complete site audit as well as around the clock security monitoring and unlimited site cleanings if your site ever is compromised. Both these products include hands-on support in case you need further assistance.