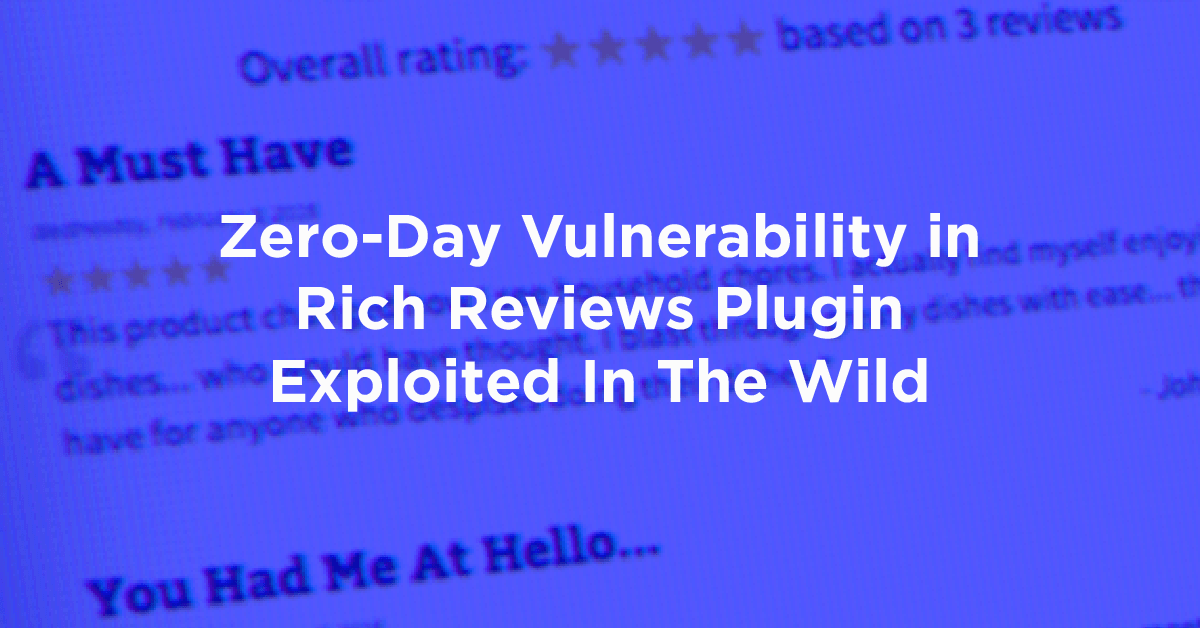 The Wordfence Threat Intelligence team is tracking a series of attacks against an unpatched vulnerability in the Rich Reviews plugin for WordPress. The estimated 16,000 sites running the plugin are vulnerable to unauthenticated plugin option updates, which can be used to deliver stored cross-site scripting (XSS) payloads.

Attackers are currently abusing this exploit chain to inject malvertising code into target websites. The malvertising code creates redirects and popup ads. Our team has been tracking this attack campaign since April of this year. You can find additional research covering this attack campaign, published by us in April and again in August of this year.

The Wordfence firewall already has built-in rules that reliably block the XSS injections in this campaign, both for Premium users and those who haven’t upgraded yet. In addition to this, we have released a new firewall rule for our Premium customers to prevent attackers from making configuration changes, such as removing the need for review approval, or defacing certain text elements.

This new Wordfence firewall rule prevents manipulation of the plugin’s settings and has been automatically deployed to our Wordfence Premium customers. The new rule will be released to free users in 30 days.

The plugin’s developers are aware of this vulnerability, but there is no patch currently available. Please see our notes on disclosure below. We recommend users find an alternative solution as soon as possible, or remove the Rich Reviews plugin from your site.

The vulnerability in this plugin is being actively exploited. The Wordfence team is seeing this in our attack data and our Security Services Team has assisted customers of our site cleaning service who have had their site compromised by an attacker who exploited this vulnerability.

Why We Are Disclosing Today

Our published disclosure policy is to ensure that developers have 7 days to fix an actively exploited vulnerability. The Rich Reviews plugin was removed from the WordPress repository 6 months ago. That means that, even if the developers release a fix, customers will not be able to update until the plugin is reinstated in the repository. We saw this forum post 5 days ago describing another site being infected via this vulnerability. At that time the developers responded with the following:

“We’ve been working on an overall rewrite of this plugin for a while now, but someone out there apparently wanted us to work faster on it, and decided to exploit our plugin to get some malware out there. We’re now going double-quick on it, and hope to have it back up (and newly cozy and secure) within the next two weeks.”

In view of the active exploitation that is affecting the WordPress community, the removal of the plugin from the repository, the inability for WordPress sites to update if a fix is released, and the vague timeline expressed by the developer, we have made the decision to disclose the details of this vulnerability now so that the community can protect themselves immediately.

The Vulnerability At A Glance

The two core issues in the Rich Reviews plugin are a lack of access controls for modifying the plugin’s options, and a subsequent lack of sanitization on the values of those options.

To perform options updates, the plugin checks for the presence of the POST body parameter update. If the expected value is present, the plugin iterates through other options passed through POST and updates their values as needed. Unfortunately, this check is made every time the plugin’s RichReviews class is instantiated regardless of user permissions or the current path. This means all incoming requests are capable of performing these changes.

A number of the vulnerable option values are responsible for customizing text displayed by the plugin. Improper sanitization of these values allows attackers to inject JavaScript payloads which can be triggered by visitors as well as logged-in administrators.

While performing forensic review of an infected site, a security analyst with our site cleaning team identified suspicious log activity associated with the Rich Reviews plugin.

An interesting note regarding this log entry is the inclusion of the plugin’s admin-post.php page string. This type of request is commonly seen in cases where an is_admin check is improperly used to test a user’s permissions, such as in this example from earlier this year. However, that workaround is unnecessary in this case, where all incoming requests are checked for options updates regardless of path.

The payloads injected by these attackers are directly associated with a malvertising campaign we’ve reported on previously:

The obfuscated payload above executes the following script:

This XSS payload is nearly identical to those we’ve identified in this campaign before. The sourced third-party script place.js is similar to others we’ve seen in this malvertising campaign as well, which could trigger popup ads and unwanted redirects.

Our Threat Intelligence Team releases indicators of compromise where feasible so that other security vendors can add detection capability to their products and provide protection to their customers. The following are IOCs that we have observed associated with this attack campaign.

The following IP addresses are linked to malicious activity against this vulnerability:

Injected content will be present in the options table of your WordPress database, with the name rr_options.

Rich Reviews, a plugin with an estimated 16,000 users, was removed from the WordPress plugin repository in March for security reasons. The current version of the plugin contains a highly exploitable options update vulnerability that can be used to inject a stored XSS payload into vulnerable sites. We have identified a known malvertising campaign abusing vulnerable sites in order to deliver popup ads and potentially dangerous redirects.

Wordfence users, both Premium and those still on Free, are already protected from the attacks in this campaign due to the firewall’s robust XSS protection. There is potential for non-XSS abuse of this vulnerability, however, which has prompted us to release a new firewall rule. Wordfence Premium users have received an automatic update containing this new rule, while free users will receive an  update in thirty days.

The plugin’s developers have acknowledged the presence of these issues, but have provided an estimate of two weeks to resolve these vulnerabilities. Due to the length of this patch process and in light of the fact that the plugin has been removed from the official WordPress plugin repository, it is recommended that Rich Reviews users find an alternative solution to ensure the security of their sites.

Please consider sharing this post to help create awareness of this security issue.

The Rich Reviews plugin has been adopted by a new development team, Starfish Reviews. The plugin has been reinstated in the WordPress.org repository, and new options handling code has been implemented which mitigates this vulnerability. Rich Reviews users should ensure they’ve updated to a secure version, 1.8.0 or greater. Thank you to the team at Starfish Reviews for resolving this issue!